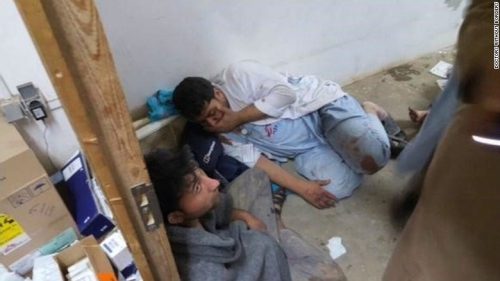 The international humanitarian law of war requires that

Medical personnel exclusively assigned to medical duties must be respected and protected in all circumstances.

Article 19 of the 1949 Geneva Convention states that

Fixed establishments and mobile medical units of the Medical Service may in no circumstances be attacked, but shall at all times be respected and protected by the Parties to the conflict.

These norms could not be clearer. Yet the World Health Organization (WHO) reports that health care workers and health care facilities are being targeted in war:

Last year, 75 hospitals managed or supported by international medical organization Doctors Without Borders/Médecins Sans Frontières (MSF) were bombed. This was in violation of the most fundamental rules of war which gives protected status to medical facilities and its patients, regardless if the patients are civilians or wounded combatants.

I naively expected that most of the attackers would have been terrorists, where ‘terrorist’ means an irregular, non-state militant. Not so, according to WHO:

Of the 594 attacks reported over the two-year period, 53% were reportedly perpetrated by State actors, 30% by non-State actors, and 17% of the perpetrators remained unknown, unreported or undetermined.

Syria is the worst offender. But are only ‘pariah’ states to blame?

Speaking in a special session of the U.N. Security Council on the protection of health care workers,… Joanne Liu [the Canadian pediatrician who is President of MSF] said four of the council’s five permanent members — Britain, France, Russia, and the United States — “have, to varying degrees, been associated with coalitions responsible for attacks on health structures over the last year.”

I’m persuaded by Steven Pinker that on a long view of history, humanity has adopted norms that have reduced violence. These norms, however, are fragile.

Declines in violence are caused by political, economic, and ideological conditions that take hold in particular cultures at particular times. If the conditions reverse, violence could go right back up.

Writing in the NEJM, Michele Heisler, Elise Baker, and Donna McKay warn that

If the international community does not mobilize to stop the attacks on Syria’s medical professionals and infrastructure, civilians will continue to suffer and die… The effects of these violations and absence of accountability will go far beyond Syria. The longer the international community fails to enforce humanitarian law, the greater the chance that these violations will become the “new normal” in armed conflicts around the world, eroding the long-standing norm of medical neutrality. Left unchecked, attacks on medical care will become a standard weapon of war.

Are US forces attacking medical personnel? On October 15, 2015, a US Special Operations AC-130 gunship attacked an MSF hospital in Afghanistan, killing 42 people.

We would never intentionally target a protected medical facility.

The State Department has also reaffirmed the US commitment to the international laws governing medical neutrality.

It’s inconceivable to me that the US military would intentionally target medical personnel. Nevertheless, the US has been at war for 15 years with no end in sight. We may be losing the norms restraining violence in war. The US has tortured prisoners and the leadership of the American Psychological Association helped blur the bright line norm prohibiting psychologists’ participation in torture. As Megan McArdle pointed out, a candidate for the US Presidency advocated war crimes as part of his campaign.

Trump defending war crimes: going after the families of terrorists. In a presidential debate. I wish this were a nightmare.

I wish it was a nightmare too.