This post is part of a series in which I’m dedicating a month to learning about twelve new things this year. The full schedule can be found here. This is month five. (tl;dr at the bottom of this post)

This month was super busy, so much so that I contemplated abandoning my reading for the month. I’m glad I didn’t. Along with month one (water management), this month was one I’ll carry with me for a long time.

I read five books. I’m only going to discuss one, because in the end, it’s the only one that matters. For those who want to know the others, they are (in no particular order):

The fifth, The Story of Art, by E.H. Gombrich, is a book you should go out and get right now. I’m serious. Go. I’ll wait. 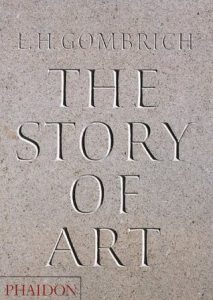 It was so well written, I was never bored. Plus, Gombrich knows his stuff and is a master teacher. I know nothing about him, but I have to assume he was a phenomenal professor. If not, he missed his calling.

There was so much about art I never considered. I was one of those people who looked at paintings and wondered how they got in museums when it looks like a kid could do it. I was wrong. Gombrich has forever changed me. Of course, Van Gogh cold paint a realistic looking animal. He chose not to. Duh.

But beyond that, I learned why art history is so important. Like many of you (or maybe I’m the only one), I assumed that art has always been stuff that people could buy to decorate their homes and hang in museums. But that’s such a recent development. I mean, really recent. Here are some of the things I learned that I never bothered to think about before:

The book pretty much has an illustration on each page as an example to discuss what Gombrich is discussing. You can almost feel like this could be a running slide show with his lecture. It’s perfect. You see enough that you start to feel like you could recognize the masters in a museum, yet you’re also exposed to artists you might never have heard from before. I also learned that there are plenty of “masters” who I didn’t know about, but should.

More importantly, I learned enough to appreciate that I likely need to see more of the actual paintings instead of looking at pictures in a book. The medium is important.

When I was in medical school, I spent a couple weeks in Italy one summer. I saw lots of art, but it was almost all in churches and such, because I loved the history more than the art. I grew up a couple blocks from the Barnes museum, and went there a lot, but that was more for the oddness of the museum than for the art. Other than that, I haven’t spent much time actively considering art.

But a couple years ago, my wife and I were in Spain – adding on a vacation to a meeting at which I was speaking. We went to a modern art museum in Madrid. This was one of those things I felt like I was doing for her, because I didn’t care much for art museums, especially for “modern” art. I wanted to spend more time seeing the castles and such.

I enjoyed it much more than I thought I would. The exhibits on the Spanish Civil War, and how the art of Goya and Picasso fit into it, fascinated me. I should have paid more attention to how I felt then. I should have spent a bit more time considering that art, and its history, might be worth my attention.

I’m glad I finally did.

tl;dr: Go buy and read The Story of Art. Now.

P.S. I also want to use this post to plug my friend Sarah Urist Green’s YouTube show The Art Assignment, produced by the same awesome people who make Healthcare Triage. It’s great! You should all be watching it.