The quality of Medicare Advantage

Medicare Advantage plans — private plans that serve as alternatives to the traditional, public program for those that qualify for it — underperform traditional Medicare in one respect: They cost 6 percent more.

But they outperform traditional Medicare in another way: They offer higher quality. That’s according to research summarized recently by the Harvard health economists Joseph Newhouse and Thomas McGuire, and it raises a difficult question: Is the extra quality worth the extra cost?

This suggested that Medicare Advantage didn’t provide the type of coverage or the access to services that unhealthier beneficiaries wanted or needed. Since the point of insurance is to pay for needed care when one is sick, it was tempting to condemn the program as having poor quality and failing to fulfill a basic requirement of coverage.

That Health Affairs paper also found that H.M.O. enrollees are more likely to receive flu and pneumonia vaccinations and about as likely to rate their personal doctor and specialists highly.

There are reasons Medicare Advantage plans might promote higher-quality care. So long as beneficiaries don’t switch among plans too rapidly (and the evidence is that once they select a plan, they tend to stick with it), plans have a financial incentive to keep their enrollees healthy, incurring less downstream cost. It’s possible, therefore, that they may offer incentives to providers to perform preventive services.

Moreover, in contrast to traditional Medicare, which must reimburse any provider willing to see beneficiaries enrolled in the program, Medicare Advantage plans establish networks of providers. This permits them, if they choose, to disproportionately exclude lower-quality doctors, ones who do not provide preventive services frequently enough, for example.

Contemplating these more recent findings on quality alongside the higher taxpayer cost of Medicare Advantage plans invites some cognitive dissonance. On the one hand, we shouldn’t pay more than we need to in order to provide the Medicare benefit; we should demand that taxpayer-financed benefits be provided as efficiently as possible. Medicare Advantagedoesn’t look so good from this perspective.

On the other hand, we want Medicare beneficiaries — which we all hope to be someday, if we’re not already — to receive the highest quality of care. Here, as far as we know from research to date, Medicare Advantage shines, at least relative to traditional Medicare.

Is Medicare Advantage worth its extra cost? A decade ago when quality appeared poor, the answer was easy: No. Today one must think harder and weigh costs against program benefits, including its higher quality. The research base is still too thin to provide an objective answer. Mr. Newhouse and Mr. McGuire hedge but lean favorably toward Medicare Advantage, saying cuts in its “plan payments may be shortsighted.”

Here’s a bonus chart, not provided in the original post, of some of the quality measure results described in the post. 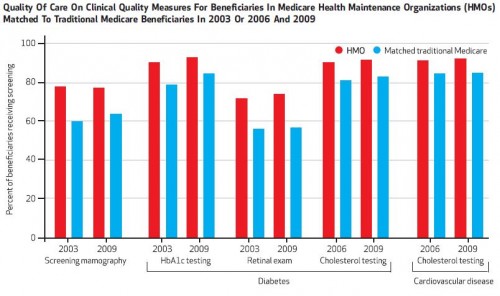