TV Values? Not so much.

Zoe Pollock had a short post last weekend that caught a friend’s eye:

Fame is the leading value emphasized by television shows popular among 9-to-11-year-olds:

Following fame in the top values in 2007 were achievement, popularity, image and financial success. In 1997, the top five were community feeling, benevolence (being kind and helping others), image, tradition and self-acceptance.

Zoe’s post was based on a Beverly Hill Courier story on the paper. They  quoted the author:

“I was shocked, especially by the dramatic changes in the last 10 years,” said Yalda T. Uhls, a UCLA doctoral student in developmental psychology and the lead author of the study, published in the July issue of Cyberpsychology: Journal of Psychosocial Research on Cyberspace.

“I thought fame would be important, but did not expect this drastic an increase or such a dramatic decrease in other values, such as community feeling. If you believe that television reflects the culture, as I do, then American culture has changed drastically.”

Time for a conflict of interest disclosure: I love TV. Love it. Almost as much as video games and comic books. Moreover, I bristle at claims that any of those things are leading to the downfall of society. So I greet studies like this with a dollop of skepticism.

I went back and looked up the original study. It was published in Cyberpsychology, and try as I might, I can’t get the website to load. Luckily, I could find a Google cache of the paper.

Let’s recognize that this was a nonrandom sample of 60 adults. So generalizibility might be an issue. Also, while I take no exception to their choice of measurement models, the author added a separate scale for “Desire for Fame”. So let’s acknowledge that this was a major focus for the study, and it’s not surprising that the result centered around fame.

Here’s where it goes off the rails for me, though (emphasis mine):

For each of five decades, we selected the two most popular shows in a given year for the tween audience in the United States, as judged by Nielsen ratings. Popularity was considered a good index of cultural significance. Nielsen ratings were obtained for 1967, 1977, 1987, 1997, and 2007. Selecting two TV shows per decade for five decades yielded a total of ten shows. Table 2 lists the ten TV shows and the sources of the Neilsen ratings.

For the first two decades, ratings for popular shows were not broken down by age; but because, at this point in history, families usually owned only one television, the likelihood was that tweens watched the shows with their parents. For the last three decades, as televisions multiplied in households and audiences became more segmented (Xlane and The Economist, 2009), Nielsen ratings were available for the tween age group. The TV programs selected as stimuli (1) were the most popular ones with youth from 9 to 11 years of age (this was the age breakdown offered by Nielsen for the last three decades) and (2) aired for more than one season, in order to assess popular programming that represented more than a single year out of the decade sampled.

This whole study was of ten shows. Total. Moreover, f`or 1967 and 1977 the author assumed that the kids were forced to watch whatever the family wanted. That might or might not be true. But most people watching The Lucy Show were adults. I’ll wager that most people watching Hannah Montana were not. So comparing the two shows as the focus of “tweens” is problematic.

Moreover, COME ON. The total focus of American Idol is the “desire for fame’. It’s a reality show that is about teens wanting to be an AMERICAN IDOL. And Hannah Montana is a show about a teen who is an AMERICAN IDOL. So does this shock anyone? 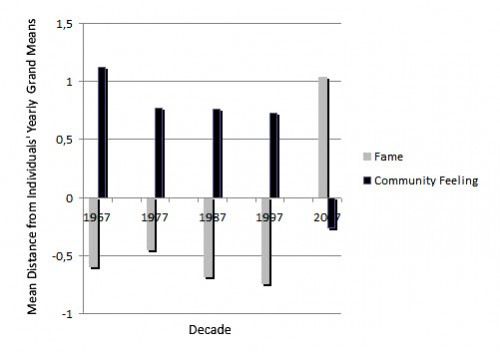 Those “shocking” and “dramatic” results are all in 2007. They are entirely related to American Idol and Hannah Montana. So yes, American Idol and Hannah Montana are more about a “desire for fame” and less about “community feeling” than all the other shows in the other decades (and arguably all the other shows on TV right now), but this tells us almost nothing about TV overall, or the overall values of tweens in America.