The state of US health ain’t so good

There’s a ridiculously fantastic manuscript over at JAMA that you should go read right now. “The State of US Health, 1990-2010: Burden of Diseases, Injuries, and Risk Factors“:

Importance  Understanding the major health problems in the United States and how they are changing over time is critical for informing national health policy.

Objectives  To measure the burden of diseases, injuries, and leading risk factors in the United States from 1990 to 2010 and to compare these measurements with those of the 34 countries in the Organisation for Economic Co-operation and Development (OECD) countries.

Design  We used the systematic analysis of descriptive epidemiology of 291 diseases and injuries, 1160 sequelae of these diseases and injuries, and 67 risk factors or clusters of risk factors from 1990 to 2010 for 187 countries developed for the Global Burden of Disease 2010 Study to describe the health status of the United States and to compare US health outcomes with those of 34 OECD countries. Years of life lost due to premature mortality (YLLs) were computed by multiplying the number of deaths at each age by a reference life expectancy at that age. Years lived with disability (YLDs) were calculated by multiplying prevalence (based on systematic reviews) by the disability weight (based on population-based surveys) for each sequela; disability in this study refers to any short- or long-term loss of health. Disability-adjusted life-years (DALYs) were estimated as the sum of YLDs and YLLs. Deaths and DALYs related to risk factors were based on systematic reviews and meta-analyses of exposure data and relative risks for risk-outcome pairs. Healthy life expectancy (HALE) was used to summarize overall population health, accounting for both length of life and levels of ill health experienced at different ages.

I’m a health services researcher, and I’m obsessed with outcomes. One of the first major projects of this blog was a two-week series on quality in the US health care system. I’ve written numerous times about what kills us. This study specifically looked at the burden of disease, injuries, and risk factors in the US versus other countries. The methods are amazingly detailed. 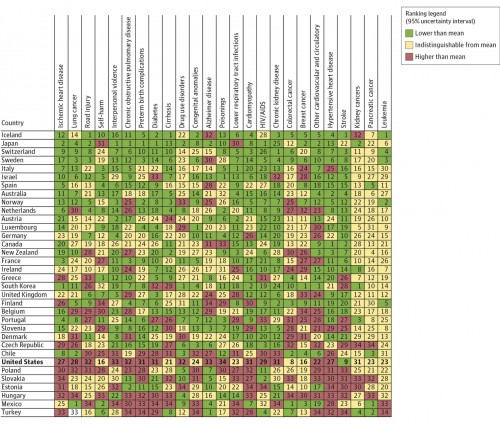 Things don’t look so good for the US. There’s an awful lot of red there. A little bit of yellow. One green. Best in the world, my ass.

Some of you will feel the urge to blame this on the racial or ethnic makeup of the US. I encourage you to look at the variety of causes of years of life lost. They don’t favor just one group. They’re all over the place. And we do pretty badly in most of them. 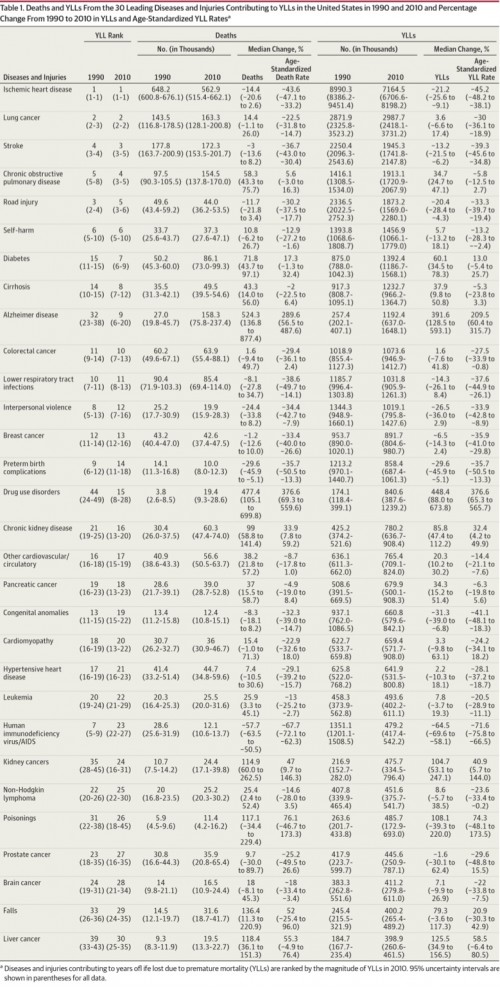 We could have the best health care system in the world. We’ve got the money and the necessary pieces to get really, really good outcomes. But we need to be much smarter about it if we’re going to do so.