The repeal and replace bill is here: The American Health Care Act. There will be a gazillion explainers, and that’s not my goal here. I’m trying to describe the bill in a few words as I can manage, to make a Healthcare Triage script. So here is my attempt. I’m going to leave comments open, and I encourage you to tell me where I’m wrong or missed something. I don’t tape until tomorrow. You can also tweet me suggested changes. Text of the bill here.

Medicaid is complicated. First of all, the bill leaves the expansion intact – for now. Everyone who signs up by 2020 gets to keep their Medicaid. But in that year, entry into the expansion is frozen, and people will only remain eligible if they don’t have a lapse in coverage of more than a month.

In some ways, this bill incentivizes states to sign up as many people as possible in the next three years, so that they qualify for a higher match amount when that goes into effect in 2020.

In 2020, we change Medicaid to a per capita block grant program. The cap rises by medical CPI plus 1%. The initial rate will be set by looking at 2016, and then increasing spending to 2019 based on that formula. That could lead to a drop in relative funding in 2020 if health care spending increases faster than inflation from now until 2020.

Lottery winners are not eligible for Medicaid. They spent a full six pages of the bill discussing this. I have no idea why.

Retroactivity changed. As of now, you can get Medicaid today and get it cover your spending for up to three months ago. This is important, because people could get coverage for things that occurred for some time before they signed up. That’s now reduced to the month in which they apply. Huge deal.

Additionally, now states have to re-determine eligibility for people on Medicaid at least every six months. This will lead to many people losing coverage, cause that’s much more of a pain than you think.

Disproportionate hospital payments are restored immediately to states that didn’t expand Medicaid, and to all states in 2020.

In 2018 and 2019, $15 billion is allocated for states to do with what they want. They could make high-risk pools. Or they could increase the size of the subsidies/tax credits. Or they could reinsure insurers to protect them from really high-cost patients.

Anyone who maintains continuous coverage will keep their community ratings – they can’t be charged more than others. If, however, they let their coverage lapse for 63 days in a year, they can be charged 30% more for 12 months.

The subsidies change, too. Now. They’re called tax credits. (Here’s a secret – they were tax credits before). But now they’re not based on how much you earn; they’re based on how old you are. 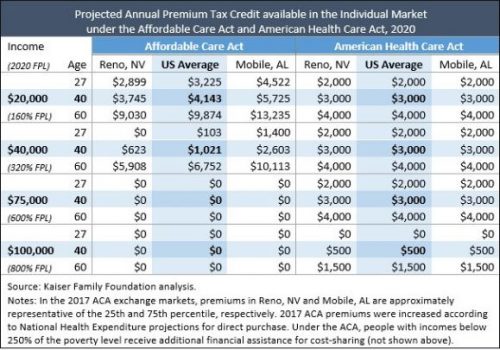 This means that poorer people, especially non-young poorer people, are going to have a much harder time affording insurance. People making more, ironically, are potentially in for a windfall.

Cost sharing subsidies are not appropriated for 2017, 2018, or 2019 – and they’re eliminated in 2020. Your subsidies also can’t be used to purchase any insurance that covers abortion.

There’s no more individual mandate or employer penalty – retroactive to 2016. Insurance companies will hate that. This will likely lead to adverse selection. That’s made worse ironically by the 30% penalty for late enrollment. Healthy people, once they’re out, simply won’t buy coverage until they’re sick – cause you’ll get the same penalty no matter what. Death spirals seem much more likely with this plan.

Age bands (the difference between what you can charge young and older people for insurance) are increased from 3:1 to 5:1 starting in 2018. This will make insurance cheaper for younger people and more expensive for older people.

For 2017, all the taxes remain in effect. In 2018, though, they’re gone. This includes the Cadillac tax (delayed until 2025, which is the same thing), the medical device tax, the tax on high salaries of insurance executives, the Medicare tax on higher earners, taxes on insurance companies, pharma, and tanning salons, etc.

People could now put even more money into their health savings accounts. The limit increases to at least $6,550 for an individual and $13,100 for a family in 2018.

Young adults can are still covered by family plans until they are 26.

There’s no CBO score yet, and it’s hard to know exactly what they find. But here are my thoughts: it’s hard to see how this won’t lead to a reduction in insurance coverage. Many people will find the subsidies insufficient to buy care.

It’s also hard to see how it will lead to much of a deficit reduction in the long term. There’s still a decent amount of spending in there and a declaration that many of the taxes/sources of revenue will end. That’s unless they plan deep, deep cuts to Medicaid in the future – which will come with its own issues.

I’m actually worried that their continuous coverage plan could actually make adverse selection worse. Why wouldn’t a healthy person go without insurance for a couple years if all they’re gonna see is a one year 30% increase in premiums as a penalty?

There’s a fair argument to be made that this is Obamacare Lite. There’s still a fair amount of regulation, the expansion is left intact until 2020, subsidies still exist – even the taxes don’t go away yet. But this is still a big difference from the ACA. The subsidies shift away from the poor to others. And Medicaid undergoes a huge sea change in 2020.

It’s a bill. It desperately needs a CBO score.