The other precious stone 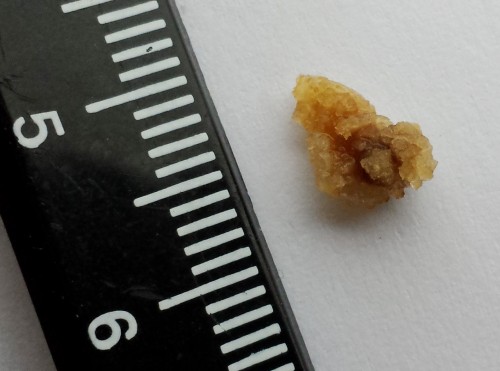 Forgive me for romancing this stone a bit, but I like to blog about personally important precious stones. Besides, a good deal of my health care use over the past six months has been centered on this 7mm kidney stone. Ain’t he cute? (My only son.) The numbered markings in the picture are centimeters.

Last I wrote about this gem, I had been to the emergency department to manage the pain and was beginning to consider prevention (still ongoing) and overuse. In hindsight, I’m not entirely sure that ED visit was necessary, if I had only had the right drugs on hand. (I have them now.) In fact, I’m not certain some of my other care was necessary, had I only had better information about expected symptoms.

An understatement of the total cost of care for this stone is about $7,000. That’s what my insurer paid. I paid another 10% in cost sharing. It’s an understatement because I’m not entirely done. There’s some post-delivery analysis yet to go. On the other hand, the delivery was by natural means, sparing my insurer (and me) the cost of more invasive procedures that would have likely run another couple thousand dollars (my best guess), maybe more.

What cost so damn much for a stone that essentially worked itself out on its own? Well, the ED visit was $1,300 or so. The contrast dye CTs were nearly that much, and I had two of them. Already this is (possibly) overuse because x-rays would have been fine and a fraction of the cost. In defense of the health system, we didn’t know we were looking for a stone the first time, and that CT was more informative about anything else that could have gone awry internally. That initial CT showed the stone in its embryonic stage, so the second CT was probably overkill, though it was over three years later than the first.

Where the more obvious overuse cropped up was in the unnecessary visit to a walk-in clinic that led to an antibiotic prescription (which was absurd) and some x-rays. I’d not have bothered — and I won’t in the future — had I known exactly what to expect from a stone. I blame my first urologist and his office for insufficient communication. I tried, I really tried, to get more information. They were not helpful.

By my calculations, I used at least 10% more health care (in dollars) than necessary, and far more if I could have avoided that ED visit. My next stone, should it take the same course, will be cheaper, but no less precious.