The Medicaid Expansion and the HIV Epidemic

One of the most intense public disputes about the ACA is the question of whether the Act is saving lives or killing them. Some partisans believe that the ACA will save thousands of lives, and some opponents are convinced that the law will kill Americans. This dispute is deeply weird to those with an actual connection to data on the topic, who recognize that it is hard to be certain about the effects of health insurance on health.

In this post, I describe a compelling theoretical argument for the health benefits of the ACA, looking at how the expansion of Medicaid might be expected to benefit HIV+ people. I’ve emphasized theoretical, because I will comment later on whether we should believe this argument.

As you know, men who have sex with men and injection drug users are at high risk of becoming infected with HIV. But as the epidemic has progressed, the disease now endangers other groups. In particular, the Southern poor:

Lynette Oliver, 46, an unemployed nursing assistant in Houma, a town of 34,000 in southeast Louisiana, had her HIV infection diagnosed this year. “People are scared to talk about it. I’ve had friends with HIV; their family disowns them, doesn’t let them eat off the same plates or drink out of the same cups.” 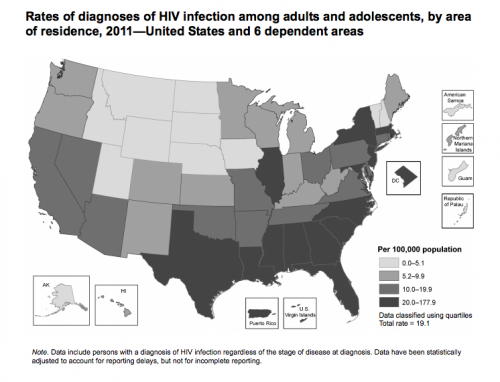 The high rate of infection in, say, New York, is not a surprise. New York was one of the epicenters of the epidemic. What may be a surprise is the high rate in the South.

“For many people in the South, HIV is not on the radar,” said Jonathan Mermin, director of the CDC’s HIV/AIDS prevention division. “But the South is heavily affected.” The Deep South — Mississippi, Alabama, Louisiana, Georgia, North Carolina, South Carolina and east Texas — has been hit hardest. “HIV is exploding in these states,” said Carolyn McAllaster, director of the Southern HIV/AIDS Strategy Initiative. A key reason, she said, is because people don’t get tested.

Getting tested is critical because if you are HIV+, but don’t know it, you can’t get treated. Learning that you are HIV+ changes your sexual behavior in ways that protect you and others. Getting treatment, and getting it early, greatly increases your life expectancy and reduces the chance that you will transmit the virus during sex.

So why don’t people get tested, and what can be done about it? Part of the problem is the stigmatization of AIDS, as Lynette Oliver described.

But in the current epidemic, HIV/AIDS is increasingly a disease of poverty. And for the poor, being uninsured is a barrier to getting tested. Zachary Wagner argues that

having health insurance may increase the likelihood of being tested for HIV, for several reasons. First, insurance subsidizes HIV testing, which lowers the beneficiary’s cost. Second, insurance reduces the cost of treatment. This makes testing more valuable, since a positive diagnosis is more likely to result in early initiation of treatment and the health benefits that result. Finally, having insurance increases the use of health care [and] increased contact with the health system provides more opportunities to be tested.

How much will getting health insurance increase HIV testing? Based on prior studies of the effect of getting insurance on getting tested, Zachary and his colleagues

modeled the impact of the ACA on HIV testing, diagnoses, and awareness of being HIV-positive, [looking only at] the eighteen states (and [the DC]) that had committed to expand Medicaid… [w]e found that the ACA will result in an additional 466,153 people’s being tested for HIV and 2,598 new diagnoses of HIV by 2017. Among people living with HIV/AIDS who gain insurance through the ACA, the share of the HIV unaware will decline by 22 percent.

If Zachary et al. are right, expanding Medicaid would likely benefit more than 2500 HIV+ Americans, as well as others through the AIDS prevention effects of HIV treatment.

Now recall that the US HIV epidemic is spreading among the Southern rural poor. The Southern states most affected by the epidemic are among the states that are not expanding Medicaid (the grey states below). 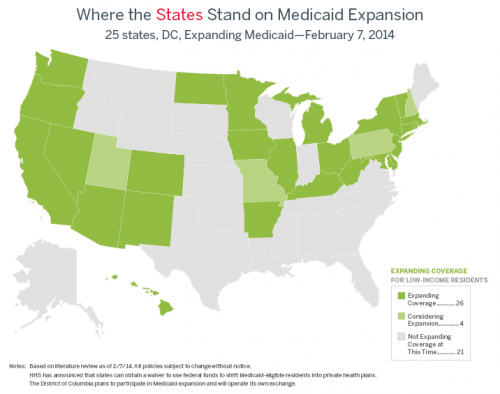 As Julia Snider argues, there are nearly 60,000 low income, uninsured Americans living with HIV/AIDS in states that are not moving forward with the ACA’s Medicaid expansion. If Zachary and Snider are right, many of these will be harmed by the failure to expand Medicaid.

But how confident should we be that expanding Medicaid will benefit those living with HIV/AIDS and those at risk? Zachary, Snider, and their colleagues are making evidence-based projections of benefits from the Medicaid expansion, but this is not the same as observing the benefits directly. In the next post, I will discuss the limits on the confidence we should have in the health benefits of the ACA.