The latest research on ACOs

Today in NEJM you’ll find two studies and an editorial pertaining to ACO performance. Below is a brief summary and commentary.

In Changes in Health Care Spending and Quality 4 Years into Global Payment, Zirui Song et al. examined cost and quality of care for patients served by providers participating in Blue Cross Blue Shield of Massachusetts’ Alternative Quality Contract (AQC). They compared them to the experience of comparable patients enrolled in certain employer-sponsored plans in other Northeastern states over 2009-2012. (If you’re not familiar with what the AQC is and does, read this.)

In the 2009 AQC cohort, medical spending on claims grew an average of $62.21 per enrollee per quarter less than it did in the control cohort over the 4-year period (P<0.001). This amount is equivalent to a 6.8% savings when calculated as a proportion of the average post-AQC spending level in the 2009 AQC cohort. Analogously, the 2010, 2011, and 2012 cohorts had average savings of 8.8% (P<0.001), 9.1% (P<0.001), and 5.8% (P = 0.04), respectively, by the end of 2012. Claims savings were concentrated in the outpatient-facility setting and in procedures, imaging, and tests, explained by both reduced prices and reduced utilization. Claims savings were exceeded by incentive payments to providers during the period from 2009 through 2011 but exceeded incentive payments in 2012, generating net savings. Improvements in quality among AQC cohorts generally exceeded those seen elsewhere in New England and nationally.

Here are two charts that illustrate some of the findings: 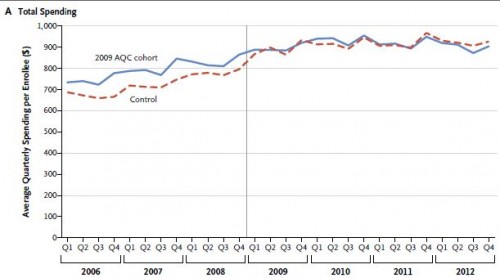 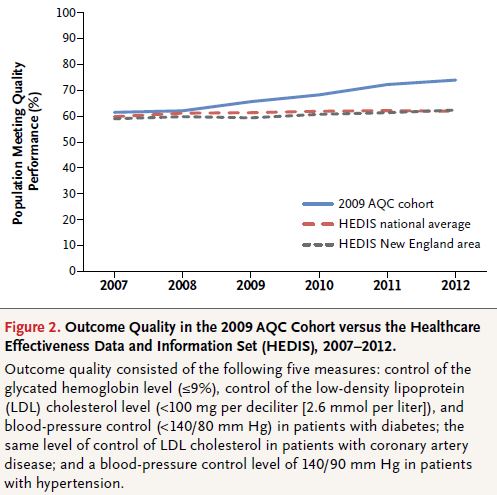 In Changes in Patients’ Experiences in Medicare Accountable Care Organizations, J. Michael McWilliams et al. considered patients’ experiences with Medicare ACO contracts after one year, relative to before ACOs formed, comparing the change to that of matched Medicare patients not served by ACOs.

Overall ratings of care and physicians and ratings of interactions with primary physicians did not change differentially in the ACO group, as compared with the control group, from the preintervention period to the postintervention period. In contrast, reports of timely access to care differentially improved in the ACO group. […]

In the editorial Accountable Care Organizations — The Risk of Failure and the Risks of Success, Lawrence P. Casalino wrote that

ACOs represent the best attempt to date to move away from business as usual and toward health care that will improve patients’ health and will not bankrupt the country. If ACOs fail, it may be a long time before a similarly bold concept emerges. […]

[Yet, t]he performance of ACOs to date has been promising but not overwhelming. Although some ACOs have gained a substantial return on their investment in improving the health of their patients, many have not. […]

The ACO movement is unlikely to succeed unless health insurance plans dramatically increase their number of ACO contracts and unless CMS modifies specifications for its ACO programs — a course that the agency is considering.

I think Casalino strikes the right tone. There are some encouraging findings about ACOs in the literature, both in the new work by McWilliams, Song, and colleagues, and in prior work. But it’s both early yet and unclear whether the most promising findings from the AQC can be generalized.

Across public and private ACOs, 18 million Americans receive care from one. Massachusetts is particularly dense in ACOs, as Song et al. write: 85% of physicians in the state have entered the AQC, 72% of Tufts Health Plan commercial managed care enrollees are under global budgets, and five organizations have joined the Medicare Shared Savings Program. This makes Massachusetts a convenient laboratory for ACO-like models, but it also makes Massachusetts unusual and threatens generality of findings from the state. Perhaps other features of Massachusetts are responsible for a tendency for ACO participation and their outcomes.

I would give ACOs another five or so years before drawing any strong conclusions about what they can do. Even a few years of generally positive results is insufficient to declare victory. It’s reasonable to be optimistic, but cautiously so. A lot could still go wrong.