The future of personalized medicine in psychiatry? 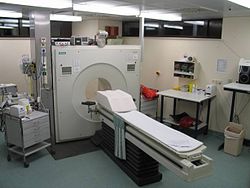 Here’s how the study worked. There were 82 patients with a diagnosis of MDD and a sufficiently high score on a depression severity measure to ensure that they were currently depressed. The researchers performed positron emission tomography (PET) brain scans of all patients. They looked at the images and identified locations in each patient’s brain that were more or less active relative to the rest of that patient’s brain.

The patients were then randomly selected into two groups, one to receive Lexapro (a commonly-used selective serotonin reuptake inhibitor antidepressant) and the other to receive cognitive behaviour therapy (CBT, the standard psychotherapy for depression). After 12 weeks of treatment, the researchers identified which patients got better (‘remitters’) and which did not (‘non-responders’). The key question was whether any pattern of activity or inactivity in the PET images predicted whether you were more likely to get better with one treatment versus the other. 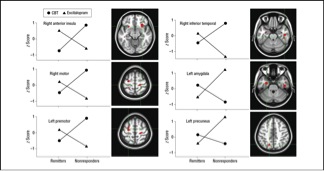 The encouraging finding was that there did seem to be such a pattern. The insula is a portion of the cerebral cortex tied to many cognitive and metabolic functions. The upper left graph in the Figure plots brain activity in the insula (vertical axis) as a function of which treatment the patients received (the two lines) and whether they got better (the two points on the left) or did not (the two points on the right). The key result was that if you had low insular activity you were likely to do better on Lexapro than on CBT, whereas if you had high activity the reverse was true. This suggests that clinicians might begin depression care with a PET scan and then use the imaging data to decide whether the patient should get psychotherapy or the drug.

The authors carefully noted that the data are far too preliminary for clinical use. Above all, the signal from the data is unusually weak. The key data pattern does not appear to be statistically significant. Moreover, the investigators explored a large space of possible brain scan patterns to find the one that best fit the treatment outcome data. I don’t think this study would have been published in a JAMA journal were it not for the originality of the question and the potential significance of the result. To be credible, the results have to be replicated prospectively in a much larger sample.

For the sake of discussion, however, let’s suppose they and others rerun this study many times and replicate these findings. Where are we then?

We would still need to think carefully about when we should use this technology. PET has a hard science patina that might be attractive to patients. Many physicians and all PET manufacturers would be pleased if an expensive scanning technology became a part of routine care for a relatively common mental illness.

This should not happen, however, without clear evidence that the benefits that patients receive from getting the better treatment are greater than the cost of the treatment and the small radiation exposure from the PET scan. This benefit might be much less than we imagine looking at the dramatic cross-over pattern in the data in the Figure. The graph represents averaged data from many patients, but the signal from an individual patient’s PET scan will be much noisier. In addition, many patients seen in routine care are less depressed than those examined in this study. The PET scan is likely to be less informative for such patients. Therefore, despite impressive results in a controlled study like this one, it could be that treatment choices based on biomarkers would be better than standard psychiatric decision making for only a few patients in a thousand.

The concern, then, is that unless we are careful in how we validate and implement the technology, even ‘successful’ biomarker technologies could add considerable expense to routine care with little or no benefit for most of the patients who receive it.

It doesn’t have to happen that way. We could introduce personalized technology with a careful evaluation of the costs and benefits both when it is implemented and as practice evolves. We could limit insurance payments for these assessments to cases where the supporting evidence is clear. We should be capturing data from routine practice for ongoing evaluations of the cost-effectiveness of care. I’ll have to save it for another post, but I don’t think we are doing enough of any of these things.