Do you know where the HRRP is heading and when? If so, how did you find the details? I ask because I’ve had a hard time tracking them down and in writing. With the help of some sources,* I finally have. So you don’t have to, I’ve documented it all below.

But what does the future hold? Turn to Section 3025 of the Payment Protection and Affordable Care Act (PPACA). It includes,

Beginning with fiscal year 2015, the Secretary shall, to the extent practicable, expand the applicable conditions beyond the 3 conditions for which measures have been endorsed [] to the additional 4 conditions that have been identified by the Medicare Payment Advisory Commission in its report to Congress in June 2007 and to other conditions and procedures as determined appropriate by the Secretary. 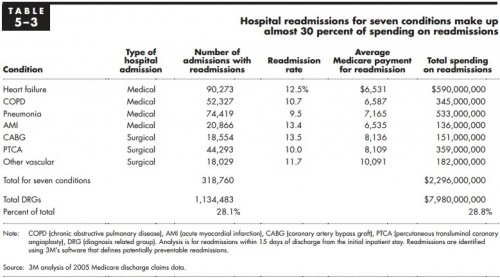 Among them, chronic obstructive pulmonary disease (COPD), coronary artery bypass graft (CABG), percutaneous transluminal coronary angioplasty (PTCA), and other vascular conditions would be new. And, there are four of them, just like the PPACA said. It also said the Secretary may add others deemed appropriate. The scuttlebutt seems to be that an all-condition measure will be among them.

HWR is the all-condition measure. I had not heard about THA and TKA measures being on the table. But, if QualityNet is right, these three will be publicly reported soon.

Should we expect public reporting to precede payment penalties? If so, then the COPD, CABG, PTCA, and other vascular conditions measures ought to be reported in 2014. And, in 2015, all of these are to be used for penalties.

* I haven’t asked if folks who helped me find this stuff want attribution so I’m withholding it by default.