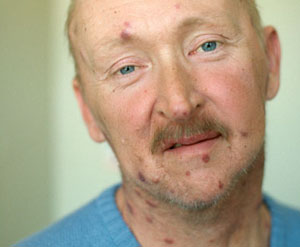 I recommend to you some excellent reporting by Don Sapatkin (based on scholarship by Phil Tiemeyer) about a distortion of the truth in And the Band Played On. This 1987 bestseller (and later HBO movie) was the first popular history of the then 6-year-old AIDS epidemic. It documented not just what was then known about the epidemiology of AIDS, but also the US government’s non-response to it. The book affected me greatly at a time when I was looking for a way to do science that mattered. But we know now that there was a lie at the center of the book.

And the Band… attracted attention in part because of the story of Gaetan Dugas (AKA ‘AIDS Patient Zero’). Dugas was a handsome gay québécois flight steward who was infected early in the epidemic. He then had sex with and infected numerous men during layovers as he travelled across the continent. And the Band… implied that Dugas played a critical role in causing the epidemic (in something like the way that Gwyneth Paltrow’s character caused the epidemic in Contagion).

But Tiemeyer discovered that author Randy Shilts and his editor intentionally misrepresented the role of Dugas to make him seem more important to the epidemic than he was.

“We lowered ourselves to yellow journalism. My publicist told me [that the Dugas story involved] ‘Sex, death, glamour, and, best of all, he is a foreigner, that would be the icing on the cake,'” Michael Denneny, Shilts’ editor, said in an interview. “That was the only way we could get them to pay attention.”

The misrepresentation stayed close to the facts. It’s not that Shilts invented Dugas or his promiscuity. Nevertheless, writing without the intention to be truthful is neither science nor journalism. The book should have been written to reflect Shilts’ actual beliefs about Dugas.

But it is too easy to wave a flag for objectivity without acknowledging the challenge Shilts faced. Forty years into the epidemic, people have forgotten or do not know about the US Government’s silence about AIDS. President Reagan infamously said nothing about AIDS until 1987. Health officials, including Surgeon General Koop, were forbidden to speak. From the National Library of Medicine’s C. Everett Koop papers:

…for the first four years in office, the nation’s top health officer was prevented from addressing the nation’s most urgent health crisis, for reasons he insisted were never fully clear to him but that were no doubt political. During the early years of the epidemic, AIDS predominantly affected people–homosexuals and intravenous drug users–who, in the view of President Reagan and his domestic policy advisers, brought the disease upon themselves by engaging in immoral conduct, and who were in greater need of moral reform than of new health information or policies. For two years, Koop was excluded from the Executive Task Force on AIDS established in 1983 by his immediate superior, Assistant Secretary of Health Edward Brandt. Journalists received instructions from Brandt’s office in advance of press conferences that the Surgeon General would not answer questions about AIDS, and that he was not to be asked about it.

27,000 Americans died of AIDS between 1981 and 1987. That is nine 9/11s. Every year of delay in implementing preventive strategies and fully mobilizing the nation’s bioscience to develop effective treatments killed tens of thousands of people worldwide.

Shilts was aware of the consequences of this silence and sought to shatter it. I imagine that he thought that he was like the man in Kant’s example who is confronted by “a murderer who has asked whether our friend who is pursued by him had taken refuge in our house.” Most of us think — though Kant did not — that with a murderer at my door I can ethically tell a lie to save a life.

So why wasn’t it legitmate for Shilts to lie when, as it were, the silent murderers were at the door? Because  in Kant’s thought experiment, lying is the only way to protect the man hunted by the murderer. In the real world, the premise that it was necessary to exaggerate the importance of Gaetan Dugas was Shilts’ belief, not a fact in evidence.

Lying in the name of a higher cause is the easy way out. The alternative is to write well enough to engage people with the truth. Shilts, who died of AIDS in 1994, wrote better than I ever will. He told a great story about AIDS activists, doctors, and patients. He rightly put people in the foreground and conveyed the epidemiology and biology (as it was understood at the time) through their stories. This is the only way to engage a large population of educated readers and I believe that the book would have succeeded without misrepresenting Dugas. Regardless, you can’t claim that you need to lie if you can write better. And you can always write better.