As we’ve discussed many times before on this blog, a large proportion of the newly insured under the Affordable Care Act will be getting Medicaid. The law could have chosen to put all the uninsured into the exchanges, with subsidies, to buy private insurance, but that would have been more expensive. That’s because – contrary to what you’ve heard – Medicaid is cheaper than private insurance, and a better deal for the federal government.

Since Medicaid is paid for by both states and the federal government, this could have been a huge loss for the states. Knowing this, the law basically says, that at least for the first few years, the feds will pick up the tab on 100% of the new people covered by Medicaid under the ACA.

Still, a lot of states are nervous about this. One reason, which I think is legitimate, is that over time, states will have to pick up the tab for a significant part of the newly insured’s Medicaid. But that’s years away at this point. A more pressing concern, which I think is less legitimate, is that there are a lot of people who qualify for Medicaid right now, but haven’t signed up for it. States fear that the expansion will encourage many of these people to come out of the woodwork and ask for the Medicaid that they should already be getting. I have less sympathy for that.

But the real question is – how many people new people are going to get Medicaid in the future. There’s a new study in Health Affairs that seeks to answer that question:

The Affordable Care Act of 2010 will expand Medicaid to millions of Americans by 2014. How many enroll will greatly affect health care access, demand for clinicians, and the federal budget, yet the precision and validity of enrollment estimates made to date is unknown. We created a simulation model using two nationally representative data sets to determine the range of reasonable projections, estimating eligibility, participation, and population growth using prior research and our data.

What did they find? This: 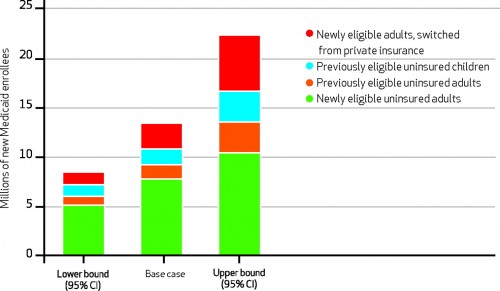 The base-case estimate found that 13.4 million new people would sign up for Medicaid. The low estimate was 8.5 million, and the high estimate was 22.4 million. The cost to the federal government for this expansion ranged from $34 billion to $98 billion. Moreover, an additional 4,500–12,100 new doctors will be needed to care for these patients.

The authors believe that the extent to which efforts encourage or discourage people from enrolling will determine where in this range we will find ourselves. In other words, it will be much like things are now. States that don’t try very hard may see less enrollment than states that do. Ironically, they may be thwarted n their efforts by an unlikely coalition:

Keep an eye on a new health industry coalition launching today: Enroll America. The 42-member coalition, which includes health heavyweights like the American Hospital Association and Aetna, has been in the works for over a year now. Today, it launches with a single goal: getting millions of Americans, newly-eligible for affordable insurance under the health overhaul law, actually signed up. And if it succeeds, the health law could end up covering many more of the uninsured than the law’s authors — or its detractors — ever thought…

Families USA director Ron Pollack, a driving force behind Enroll America, recruited one of the oddest-bedfellow coalitions that exists in the health industry right now, which will increase its reach. Some members, like the American Hospital Association, aggressively support the Affordable Care Act. Others aggressively oppose it. The National Association of Health Underwriters, a member group that lobbies for health insurance brokers, has endorsed health reform repeal legislation.

But if the law stands, they all have a common interest: getting uninsured Americans covered. Insurers want more customers. Hospitals are sick of providing uncompensated care. Health brokers make commissions off enrollment.

States may be banking on low Medicaid enrollment, as they have in the past. If stakeholders have their way, though, they won’t have a choice.