The cost-effectiveness of treatment for opioid dependency

Once championed as the answer to chronic pain, opioid medications and painkillers have become a large and costly problem in the United States. Fatal overdoses have quadrupled in the last 15 years, and opioids now causemore deaths than any other drug, over 16,000 in 2010. Prescription opioid abuse is also costly, sapping productivity and increasing health care and criminal justice costs to the tune of $55.7 billion in 2007, for example.

Addressing this problem would cost money, too, but evidence suggests it would pay for itself.

Much of the problematic use of opioids like Vicodin and OxyContin originates with a prescription to treat pain. Prescriptions can be of tremendous help to certain patients. But doctors write a lot more of them for opioids in the United States than they should, enough for every American adult to have a bottle of opiate painkillers each year, according to the U.S. Centers for Disease Control and Prevention.

One approach to the problem, therefore, is to attempt to reduce the number of prescriptions written by targeting use to patients for whom the medications are most appropriate. In July 2012, for example, Blue Cross Blue Shield of Massachusetts began requiring prior authorization for more than a 30-day supply of opioid medication within a two-month period. After 18 months, the insurer estimates that it cut prescriptions by 6.6 million pills.

Except for Missouri, all states have or plan to soon have drug databases in place that can be used to track prescribers of opioid painkillers and those that use them. Not all states require doctors to check the database before prescribing the medications, though — a provision that has been demonstrated to reduce overuse. For example, in 2012 the states of New York and Tennessee began requiring doctors to check their states’ drug monitoring databases before prescribing opiate painkillers. Both states saw substantial drops in patients who received duplicate prescriptions of drugs from different doctors, one pathway for overuse and overdose.

Prevention and better targeting are sensible, but they do little to assist patients already dependent on opioids. Those patients need help, and more than just a short stint in a detox facility. The modern view of opioid dependency is that it’s akin to a chronic disease, like diabetes or hypertension, which requires maintenance therapy: long-term treatment with a craving-relieving substitution agent like methadone or buprenorphine, sometimes combined with other medications.

Such treatment isn’t free, of course, but many studies have shown it’s worth the cost. Just considering health care costs alone, studies have shown it to becost-effective with substantial offsets in reduced spending on other types of health care. For example, methadone treatment limits the spread of H.I.V. by reducing the use and sharing of needles. It also reduces hospitalization and emergency department use, such as treatment of trauma, perhaps from accidents. Considering the broader, social costs of opioid dependence as well — those due to lost productivity and crime — the case that maintenance therapy for opioid dependence is cost saving is even stronger.

Recently, the Comparative Effectiveness Public Advisory Council conducted an economic analysis of expanding opioid treatment in New England states. The council found that as access to treatment increased, total costs of treatment also grew, but savings to society increased even more rapidly. The result is that greater treatment actually saves society money. For instance, New England states could save $1.3 billion by expanding treatment of opioid-dependent persons by 25 percent. 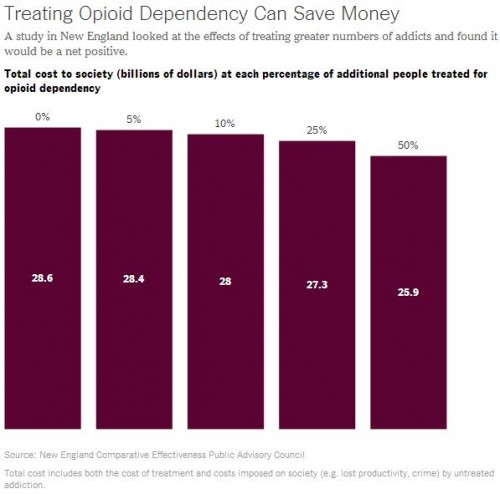 If maintenance therapy is such a good deal, why don’t we more readily provide it? One answer is that, though treatment works, its benefits are diffuse. A great deal of the cost of treatment would be borne by insurers and public health programs. But a great deal of the savings would be captured by society at large (through a reduction in crime, for example). As my colleagueKeith Humphreys and co-authors wrote, “If, for example, one is held responsible to keep a hospital budget in balance, spending scarce funds on [substance use disorder] treatment does not become more attractive just because it saves money for the prison system.”

Another reason maintenance therapy for opioid dependency is underprovided is that it is still misunderstood. Culturally, there’s a temptation to view dependency as a result of poor lifestyle choices, not as a chronic disease, and to view maintenance treatment as merely substituting one addiction for another. (This is akin to viewing chronic insulin use as a mere substitute for chronic diabetes.) And, to be fair, there are real issues, such as the potential for misuse and diversion, associated with maintenance drug therapy for opioid dependency. Those deserve some attention, but not out of proportion to the problems they pose.

It’s clear that treatment for opioid dependency is underprovided for a variety of reasons, and that this, in turn, helps promote the growth in the problems dependency causes. But it’s also clear that those dependent on opioids aren’t the only victims. Because of the social costs the problem causes, many others are as well.