Chapter 11 of The Cost Disease covers a lot of territory. My comments will not be comprehensive and will focus on an aspect of the chapter that I found puzzling.

Baumol begins by making the valid distinction between the magnitude of cost and its growth. (I believe Mike Chernew explores this topic in some paper, but I can’t find it. Maybe it was just a presentation.) Baumol then explores many potential ways by which the health system might be made more efficient. I don’t agree they all would do that, but that’s not a point I want to dwell on.

In any case, I fundamentally disagree with that. In fact, I think one of his ideas for efficiency would address growth, not just shift the level. Baumol spent many pages describing how many health interventions and technologies are not as effective as cheaper ones or are too frequently applied to patients for whom they are inappropriate. I assert that systematically addressing this source of inefficiency would reduce the rate of growth of health care costs (spending), relative to the rate at which it would grow in the absence of such an effort. Here’s my “proof”:

Imagine that each year two types of health technologies are introduced to the existing set: type 1 is efficiency enhancing and type 2 is not. (This is stylized, but the idea that some technologies are efficient for some patients and not for others is an easy generalization that doesn’t change the conclusion.) For simplicity, and with no loss in generality, assume that in the absence of any assessment or controls on use of type 1 and type 2 technologies, we would spend an equal number of dollars consuming each. Also assume that with a program of comparative effectiveness research (CER) and translation of research to coverage and clinical decision making, we would spend the same on type 1 technologies as we would otherwise, but nothing on type 2. That is, we are successful at eliminating whatever inefficient technologies become available each year.

Now compare what happens over time. Without a successful program of CER and its translation and implementation, we would spend a growing amount on inefficient care (type 2). With it, we spend none. The trajectory of spending over time in these two cases looks like this:

The black, solid line is the trajectory of spending on both type 1 and type 2 technologies. The blue, dashed line is just type 1, under the assumption we can ward off use of type 2. It’s obvious that the rates of growth of the lines are different. One can relax all of the assumptions in the foregoing sketch and still get this result, though the difference in rates would change. All that matters is that we exert some consistent and downward pressure on the inefficient application of technologies. To be sure, this is not easy, but it is not impossible. In any case, the notion that we have no means by which to control the rate of growth of health care cost (spending) is not correct, at least in principle. The returns to a focus on efficiency really do accumulate.

Chapter 12 is a very brief conclusion. Here’s mine: The cost disease theory is interesting and may explain some of the observed increase in spending on health care. But I remain unconvinced that it is the only important mechanism of health care spending growth. As I have documented, Baumol touched on some of the other mechanisms (e.g., provider market concentration, technology and its overuse or misuse, etc.) and dismissed them too easily in my view. I’m now not certain that health care workers have not experienced real growth in wages, as suggested in Chapter 1. See, for example, the most recent work by Seabury, Jena, and Chandra, from which the following chart was taken. (Black dots = change from 1987-1990 to 1996-2000. White dots = change from 1996-2000 to 2006-2010. Error bars = 95% confidence intervals. Estimates from median regression of log earnings or hourly wages with other covariates including age, age squared, sex, race, state of residence, and year.) 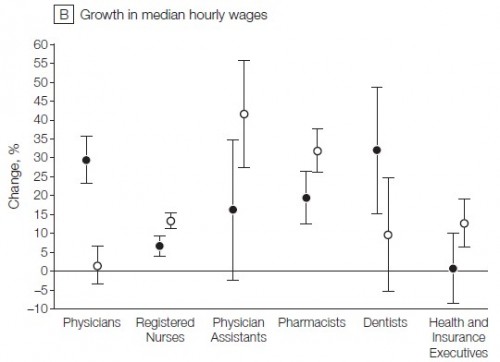 Putting all that aside, I do agree with Baumol that a chief issue we face is not the level of health care spending or even its growth but the inefficiency of that spending. Nevertheless, health care spending as a problem manifests itself in a struggle over a need for greater government revenue and the distribution of taxation that will deliver it. That is, and as Baumol himself states, even if one buys the cost disease theory, and even if it means that collectively we would have sufficient wealth to afford the expected growing health care bill, we will still face substantial political and policy challenges. Even if we can accommodate it in principle, the growing will be painful.

All posts about the book are under the Cost Disease tag.