Just like last week, I’m trying to describe the report in a few words as I can manage, to make a Healthcare Triage script. The below is my attempt. I’m going to leave comments open, and I encourage you to tell me where I’m wrong or missed something. I don’t tape until tomorrow. You can also tweet me suggested changes. Text of the report here.

The Congressional Budget Office is charged with producing independent analyses of budgetary and economic issues to support the Congressional budget process. It’s a nonpartisan office, and its current director was appointed by the Republicans in Congress. Keith Hall is not generally considered a fan of the ACA, and you can go read some glowing quotes about him by then-Congressman and now-HHS Secretary Tom Price here.

Let’s be frank: the CBO report doesn’t look good for the AHCA. Let’s divide its findings into a number of domains in order to understand it more fully.

In 2018, just next year, the AHCA would result in 14 million more people being uninsured than under current law. Most of that would come from repealing the mandate. Some would choose not to buy insurance cause they don’t have to (healthy people) and some because they couldn’t afford it.

By 2020, the number of additional uninsured due to the AHCA would be 21 million. By 2026, it would be 24 million. Most of the newly uninsured at that point would be due to changes in Medicaid (which I’ll get to in a bit).

The CBO agrees with me that the continuous coverage provisions might not work as planned. They think they will increase the number of people with insurance in 2018, but reduce the number in 2019 and beyond. In that first year, about a million people will buy insurance to enter the program, but each year after that, about 2 million will not because they will be forced to pay a penalty when they do. Those will be healthier people, by the way.

Medicaid takes it on the chin. The CBO thinks that over the next decade, spending on the program would be reduced by about $880 billion. As we discussed last week, the per capita block grants go up each year by medical CPI+1%. The CBO agrees with me that this is likely to rise more slowly than actual medical spending in Medicaid.

It estimates that CPI-M will go up 3.7% each year on agerage over the decade. Medicaid spending will go up 4.4% a year, though. That leaves a lot of money for the states to make up. Either they do that, or they start to cut.

Enrollment is expected to drop pretty impressively, by about 14 million in 2026. Before 2020, almost all those dropped from Medicaid are not expansion-eligible individuals, although the percentage from that population increases starting then through 2026. 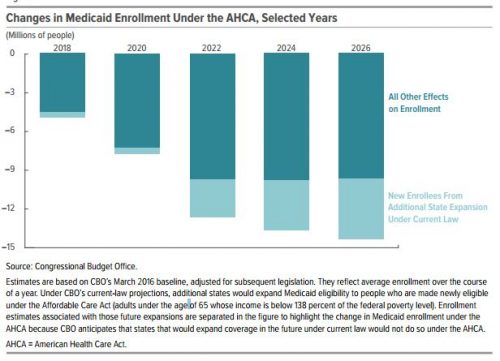 If you listen to some politicians, they claim Obamacare is in a death spiral. Others, like me, think that’s massively overstating the case. But let’s listen to the CBO: “Under the AHCA, the subsidies available, added to the grants in the Patient and State Stability Fund, would stabilize the market.”

But the CBO also says the market is stable under current law. In essence, the AHCA doesn’t change much in that respect.

In 2018 and 2019, premiums would actually go up about 15-20% because with the elimination of the mandate, healthy people will leave the market and leave the risk pool sicker, and more expensive.

But, in 2020, the Patient and State Stability Fund could be used to offset the costs of the very sick. Insurers could also start to offer plans of lower actuarial value – which would allow for premiums to be lower. Of course, that means higher OOP payments, but I’ll get to that in a second. They also think healthier, younger people might return, lowering the price per beneficiary.

These changes will combine to let premiums be about 10% lower in 2026 than under current law.

Of course, there are averages. Older people are gonna get crushed and younger people will do better. More on that in a minute.

Details on Premiums and Subsidies on the Exchanges

Under the AHCA, the cost of insurance itself is lower for the 21yo, slightly lower for the 40yo, but much higher for the 64yo. But the subsidies go way down, cause they don’t adjust for wealth. So the 21yo will pay $1450 (which is slightly less), but the 40yo pays $2400 (more), and the 64yo pays $14,600 (which is more than half their income). And this new insurance has an actuarial value about 20% lower, meaning that they have much higher OOP payments. 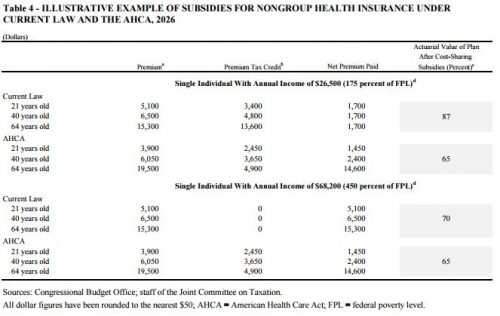 So the more well-off see some premium savings (but slightly higher OOP payments), but the poor get, well, hammered. Especially the older, poorer people.

Effects on the Federal Budget

There are massive reductions in spending under the AHCA. Outlays for Medicaid go down $880 billion. The elimination of the ACA’s subsidies in 2020 saves another $673 billion. Decreases in the employer-based health insurance market save another $70 billion. And repealing a tax credit to small employers for providing insurance saves $6 billion.

But! The new tax credits cost $361 billion. Getting rid of mandates and penalties costs another $210 billion. The Patient and State Stability Funds cost $80 billion. And reinstating DSH payments costs $43 billion.

And let’s not forget the tax cuts. About $600 billion in tax cuts, most to people at the very high end of the socioeconomic spectrum.

Bottom line: Spending goes down about $1.22 trillion dollars, and revenue goes down about $883 billion. Therefore, the CBO projects that the federal deficit would be reduced by $337 billion over a decade.

And since I get this question a lot, eliminating Planned Parenthood coverage saves (overall) $156 million over a decade. The technical reduced outlays are more, but that’s reduced by increases in Medicaid spending, thousands more births, and associated care. And because this is the real world and there are tradeoffs, lots of women will lose access to care in “areas without other health care clinics or medical practitioners who serve low-income populations.”