The ACA, Ted Cruz’s taxes, and two views of fairness

There are young people who will pay more for insurance as a result of the ACA. Cathy Reisenwitz thinks this is unfair:

The problem with [the ACA] is that it hoses young, relatively poor people like me right when we least need high bills for services they’re not using. And it helps older, relatively rich people who should be able to afford the care they need. If America’s downtrodden and struggling young people are smart, they’ll opt out.

She thinks it’s unfair because young people entering the job market earn less than older people and they also have lower health care expenses, so they are subsidizing the health care of older rich people.

Reisenwitz has mischaracterized who receives the ACA transfer. But first, let’s note that there is a program that transfers her money to the elderly. It’s called Medicare. Medicare is funded through Reisenwitz’s taxes now, but it will not benefit her for decades. It seems odd that she does not mention it in her post.

However, it would be misleading to call Medicare a transfer from the young to the elderly rich, because many beneficiaries are either poor or would be impoverished by their health care expenses, but for the Medicare program. Before Medicare, the elderly were by far the most impoverished group in America (US Census data). 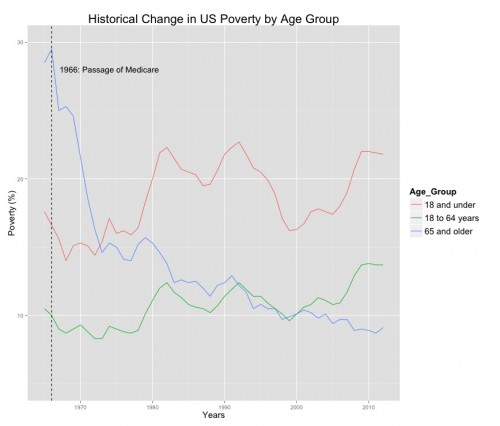 After Medicare, elder poverty dropped swiftly, while poverty among those 18-64 and among children has slowly climbed. Reisenwitz could plausibly argue that Medicare and Social Security have transferred too much to the elderly, or that these programs should be means tested. But such criticisms should be balanced by acknowledgement of how much Medicare has improved the lives of the elderly.

There is another ‘program’ that also transfers Reisenwitz’s funds to well-off older people. From her internet profiles, she appears to be a freelance writer. If so, she is paying for health insurance (if she has it) using dollars that have already been taxed. Many well-off older people, however, receive health insurance as a benefit from their employer. The value of that benefit is not taxed as it would be if the employee received it in wages or salary. (The ACA’s ‘Cadillac tax’ on high end health plans, is in part an attempt to address this inequity.) So Reisenwitz contributes to a tax subsidy for people who are often a lot wealthier than she is. One of the people she subsidizes is Senator Ted Cruz, spouse of a Goldman Sachs partner.

The ACA, however, doesn’t transfer resources to the elderly rich. The ACA transfers resources to people who are uninsured, many of whom are low income or have pre-existing medical conditions that excluded them from the private insurance market. As Josh Barro explains, this is why health insurance will now cost more for some young people.

It’s a lot cheaper to provide health insurance coverage if you exclude a lot of the people who need it most. Making insurance available to people with pre-existing health conditions costs money. Obamacare funds this transfer to the chronically ill in part by raising premiums on healthy people… The question is “is it better than the old system, where huge subsidies go to people with no need for them and tens of millions are left uninsured?” That answer, if you consider the costs and benefits honestly, is yes.

For the last few weeks, I have seen a vast outpouring of conservative sympathy for young, healthy, prosperous people whose health plan premiums are going up. These poor, poor things. How could Barack Obama do this to them? …But what about the tens of millions of Americans who currently lack health insurance and are about to get access to available, affordable coverage? Where is the conservative sympathy for people who would be worse off if the law doesn’t go forward?

I think this is a powerful argument, but I doubt that it will sway many conservative critics of the ACA. Are they really concerned about the relative wellbeing of the young and old? My guess is that they object in principle to government transfers of any kind. (How conservative policies work in practice is for another post.) What’s unfair is the transfer itself, not the pattern of wellbeing that results from it.

The ACA comes from a view of justice in which severe and prolonged differences in wellbeing between social groups do pose questions of fairness. On this view, some patterns of relative wellbeing can justify redistributive government transfers. If the ACA does half as well as Medicare, it’ll be worth these years of struggle.