Last week, Harold wrote some great posts about the work of Sendihl Mullainathan and Eldar Shafir on poverty, thinking, and behavior. I want to comment on how this pathbreaking work should affect how we think about health and justice.

To set the stage, here is a model that explains why poor people have poor health.

Call it the stupid incompetent people model. It’s an uncharitable model, because it attributes poor health to the capabilities and characters of unhealthy people. It suggests that many of the unhealthy poor deserve that fate. This isn’t the whole story, you say. Many capable people screw up their health. And poor health often has nothing to do with our character or behavior. It’s just bad luck.

Moreover, don’t we want the world to be structured so that functional behaviors — abstaining from cigarettes, or pursuing more education, or saving for retirement, or… — lead to higher income or better health? Doesn’t a world with incentives for functional behavior benefit everyone? These incentives lead to prosperity, stable families, low crime and so on. Conversely, in a world without incentives — a world that redistributed outcomes so that virtue had the same reward as vice — there would be less of the good things that virtuous behavior produces. Life would be that much more solitary, poor, nasty, brutish, and short.

So why isn’t the stupid people model a description of a just world?

One reason is that it holds people responsible for personal attributes that they do not control, such as the genes they received from their parents. Another reason is that the model does not acknowledge that many of the rich are highly capable because they had well-off parents. Those parents invested time and money in their children’s health and education. Conversely, many of the poor have limited capabilities because they were raised in relative deprivation. This graph (thanks to @BrendanSaloner) shows how much more the rich spend on their children compared to the poor, and how that inequality has increased over time. 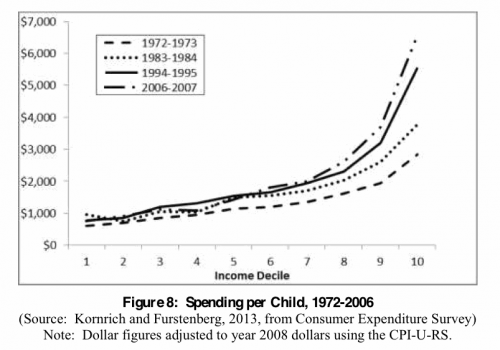 Because the children of well-off parents get a better start, we don’t have fair equality of opportunity in the competition for better outcomes.

Mullainathan and Shafir’s data, however, lead to an important new criticism of the stupid incompetent people model.

M and S present extensive experimental data showing that the experience of scarcity deeply affects our ability to think. When primary resources like food, money, or time are scarce we experience a kind of tunnel vision. In the tunnel, information related to the scarce resource dominates our thinking at the expense of the many other things we need to monitor. We have reduced attention, memory, and self-control and we make worse decisions. These changes are unconscious, automatic, and largely beyond our willful control. In short, scarcity makes us stupid, leading to bad choices about health behaviors. From their book,

Poverty itself taxes the mind… poverty reduces fluid intelligence and executive control… this suggests a major twist in the debate over the cognitive capacity of the poor. We would argue that the poor have lower effective cognitive capacity than those who are well off. This is not because they are less capable, but rather because part of their mind is captured by scarcity.

So now there is a new causal model for why the poor are unhealthy.

The M and S model, if their data hold up, complements rather than replaces the stupid people model. In the real world, causality runs every which way. As I see it, everyone should have access to insurance to protect us from bad luck and, to some degree, our own stupidity. Nevertheless, it’s right that people should experience much of the pain generated by their own incompetent decisions. But we should also have a society with a priority on ending chronic inequality in exposure to scarcity — more briefly, poverty — and ensuring substantive equality of opportunity. It’s only fair.