Primary care doctors could get a pay raise next year for treating Medicaid patients, under a rule announced by the Obama administration Wednesday.

The proposed regulation implements a two-year pay increase included in the 2010 health-care law. The increase, effective in 2013 and 2014, brings primary care fees for Medicaid, which covers indigent patients, in line with those for Medicare, which insures the elderly and some disabled patients.

Although Medicaid is jointly funded by states and the federal government, the pay boost would be covered entirely with federal dollars totaling more than $11 billion over the two years it would be in effect.

Congress automatically appropriated those funds when it adopted the health-care law, so it will not need to act now.

Granted, I’m a pediatrician, so feel free to accuse me of bias here, but this is fantastic news for those of us who see a lot of patients on Medicaid. It also has a secondary effect of increasing payments for a lot of primary care providers, also a problem in the US. There’s not much to hate here, other than the cost.

But let’s be real here. We’re talking about $5.5 billion a year. Yes, that’s a lot of money, but compared to overall health care spending? 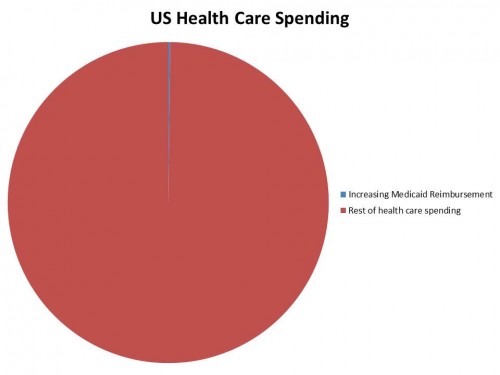 That’s almost infinitesimal. But what about if we only compare it to Medicaid spending? 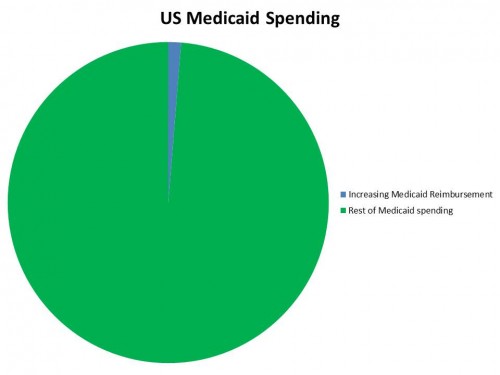 It’s still not that much. Moreover, it’s entirely covered by the federal government for two years, so in the short term, states have little to complain about.

Now I’m not suggesting there aren’t problems here. This is all part and parcel of the ACA. If that gets overturned by the Supreme Court in June, all of this goes away. The same holds true if the whole law were repealed next year. And, in two years, it’s going to be a struggle to find the additional money to keep this going, especially if some of it falls to the states.

But let’s face some facts. Medicaid is still a pretty lean program, and costs less than putting people on private insurance in the exchanges. We face a primary care shortage, in large part because we don’t reimburse those physicians as well as we do specialists. And many docs do avoid Medicaid because the program pays so much less than Medicare and private insurance. This small change impacts all of those problems at the same time.

Sometimes good things cost money. Yeah, there’s no money now, but wait until they threaten to cut Medicare reimbursements in a couple months during the next “doc fix” crisis, and you’ll see how quickly people’s tunes change. Shoring up Medicaid in the eyes of providers while simultaneously making it more enticing to be a primary care doctor? This here is a bargain.