Something Happened to U.S. Drug Spending in the 1990s

The following originally appeared on The Upshot (copyright 2018, The New York Times Company). It also appeared on page B4 of the print edition on November 13, 2018. Research for this piece was supported by the Laura and John Arnold Foundation.

There was a time when America approximated other wealthy countries in drug spending. But in the late 1990s, U.S. spending took off. It tripled between 1997 and 2007, according to a study in Health Affairs.

Then a slowdown lasted until about 2013, before spending shot up again. What explains these trends? 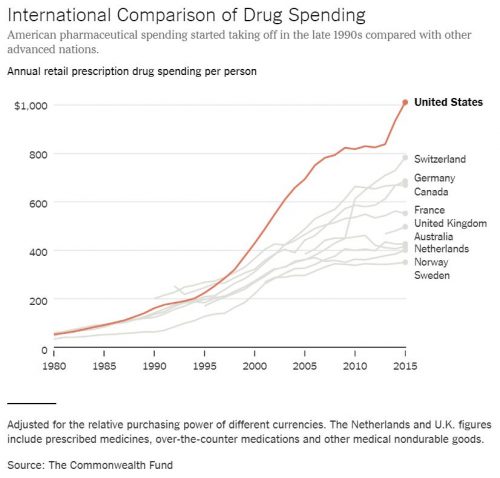 By 2015, American annual spending on prescription drugs reached about $1,000 per person and 16.7 percent of overall personal health care spending. The Commonwealth Fund compared that level with that of nine other wealthy nations: Australia, Canada, France, Germany, the Netherlands, Norway, Sweden, Switzerland and Britain.

Among those, Switzerland, second to the United States, was only at $783. Sweden was lowest, at $351. (It should be noted that relative to total health spending, American spending on drugs is consistent with that of other countries, reflecting the fact that we spend a lot more on other care, too.)

Several factors could be at play in America’s spending surge. One is the total amount of prescription drugs used. But Americans do not take a lot more drugs than patients in other countries, as studiesdocument.

In fact, when it comes to drugs primary care doctors typically prescribe — including medications for hypertension, high cholesterol, depression, gastrointestinal conditions and pain — a recent study in the journal Health Policy found that Americans use prescription drugs for 12 percent fewer days per year than their counterparts in other wealthy countries.

Another potential explanation is that Americans take more expensive brand-name drugs than cheaper generics relative to their overseas counterparts. This doesn’t hold up either. We use a greater proportion of generic drugs here than most other countries — 84 percent of prescriptions are generic.

Though Americans take a lower proportion of brand-name drugs, the prices of those drugs are a lot higher than in other countries. For many drugs, U.S. prices are twice those found in Canada, for example.

Prices are a lot higher for brand-name drugs in the United States because we lack the widespread policies to limit drug prices that many other countries have.

“Other countries decline to pay for a drug when the price is too high,” said Rachel Sachs, who studies drug pricing and regulation as an associate professor of law at Washington University in St. Louis. “The United States has been unwilling to do this.”

For example, except in rare cases, Britain will pay for new drugs only when their effectiveness is high relative to their prices. German regulators may decline to reimburse a new drug at rates higher than those paid for older therapies, if they find that it offers no additional benefit. Some other nations base their prices on those charged in Britain, Germany or other countries, Ms. Sachs added.

That, by and large, explains why we spend so much more on drugs in the United States than elsewhere. But what drove the change in the 1990s? One part of the explanation is that a record number of new drugs emerged in that decade.

In particular, sales of costly new hypertension and cancer drugs took off in the 1990s. The number of drugs with sales that topped $1 billion increased to 52 in 2006 from six in 1997. The combination of few price controls and rapid growth of brand-name drugs increased American per capita pharmaceutical spending.

“The scientific explosion of the 1970s and 1980s that allowed us to isolate the genetic basis of certain diseases opened a lot of therapeutic areas for new drugs,” said Aaron Kesselheim, an associate professor of medicine at Harvard Medical School.

He pointed to other factors promoting the growth of drug spending in the 1990s, including increased advertising to physicians and consumers. Regulations on drug ads on TV were relaxed, which led to more advertising. More rapid F.D.A. approvals, fueled by new fees collected from pharmaceutical manufactures that began in 1992, also helped push new drugs to market.

In addition, in the 1990s and through the mid-2000s, coverage for drugs (as well as for other health care) expanded through public programs. Expansions of Medicaid and the Children’s Health Insurance Program also coincided with increased drug spending. And Medicare adopted a universal prescription drug benefit in 2006. Studies have found that when the potential market for drugs grows, more drugs enter it.*

In addition, the patents of many top-selling drugs (like Lipitor) expired, and as American prescription drug use tipped back toward generics, per capita spending leveled off.

The spike starting in 2014 mirrors that of the 1990s. The arrival of expensive specialty drugs for hepatitis C, cystic fibrosis and other conditions fueled spending growth. Many of the new drugs are based on relatively recent advances in science, like the completion of the human genome project.

“Many of the new agents are biologics,” said Peter Bach, director of the Center for Health Policy and Outcomes at Memorial Sloan Kettering Cancer Center. “These drugs have no meaningful competition, and therefore command very high prices.”

A U.S. Department of Health and Human Services issue brief estimated that 30 percent of the rise in drug spending between 2000 and 2014 could be attributed to price increases or greater use of higher-priced drugs. Coverage expansions of the Affordable Care Act also contributed to increased drug spending. In addition, “there has been a lowering of approval standards,” Dr. Bach said. “So more of these new, expensive drugs are making it to market faster.”

“As in the earlier run-up in drug spending, we’re largely uncritical of the price-value trade-off for drugs in the U.S.,” said Michelle Mello, a health law scholar at Stanford. “Though we pay high prices for some drugs of high value, we also pay high prices for drugs of little value. The U.S. stands virtually alone in this.”

Outlook for the future

If the principal driver of higher American drug spending is higher pricing on new, blockbuster drugs, what does that bode for the future? “I suspect things will get worse before they get better,” Ms. Sachs said. The push for precision medicine — drugs made for smaller populations, including matching to specific genetic characteristics — may make drugs more effective, therefore harder to live without. That’s a recipe for higher prices.

Democratic politicians have tended to be the ones advocating governmental policies to limit drug prices. But recently the Trump administration announced a Medicare drug pricing plan that seems to reflect growing comfort with how drug prices are established overseas, and there’s new optimism the two sides could work togetherafter the results of the midterms. Although the effectiveness of the plan remains unclear, it is clearly a response to public concern about drug prices and spending.

CVS also recently announced it would devise employer drug plans that don’t include drugs with prices out of line with their effectiveness — something more common in other countries but unheard-of in the United States. Even if these efforts don’t take off rapidly, they are early signs that attitudes might be changing.

* Not noted in the original piece, this reflects a tradeoff between revenue (or profit) that can be earned by drug manufacturers and pace of pharmaceutical innovation. If profits were to fall with price reductions, we should expect less innovation in the future.