In her Brookings paper on health care spending growth Louise Sheiner’s makes (or suggests) several points that probably receive insufficient emphasis. In fact, one of the last points she implies should probably be the first thing anyone says on the subject, so I’ll make it explicit:

Short-run analysis can be misleading about long-run spending growth. Or, to be even more clear, be very skeptical about predictions of health spending growth a few decades from now based on experience over the last decade alone. As has been found in long-term studies in the past, in the long run, it’s probably “the combination of technological innovation and a continued willingness-to-pay for that technology,” as Sheiner wrote, that will determine how much we spend on health care and how quickly.

Still, much has been made about recent, short-run health spending trends. Earlier today, Tom Liu explored them, with an emphasis on the degree to which the ACA can be credited with the recent slowdown or blamed for the even more recent pickup in spending. More analysis can be found by Cutler and Sahni, Holahan and McMorrow, Levitt and colleagues, and Chandra, Holmes, and Skinner, among many others.

To varying degrees, some of these studies emphasize the role of “the economy” (GDP), and Sheiner does as well. The Great Recession, which began at the end of 2008, looms large and surely had some effect on health spending. But wait, didn’t Tom write that the most recent slowdown in health spending began in 2003, predating the Great Recession by five years? Indeed he did, and he’s right!

However, as large as the Great Recession looms, it was not the only recession (duh). There was also one in 2001. Could that have played a roll?

That brings me to my second point: recessions matter, a lot. As Sheiner and others have shown, macroencomic effects are associated with health care spending with a lag on the order of five or six years. Some of the slowdown in the early-to-mid aughts can be associated with the 2001 recession. Likewise, some of the slowdown in the late aughts through the early part of this decade can be associated with the Great Recession. As the following chart from Sheiner shows, a model of health spending growth per capita based on five years of lagged GDP per capita predicts actual growth quite well, though certainly not perfectly (red line vs. blue line). Other work has demonstrated a tight connection between per capita GDP and health spending. 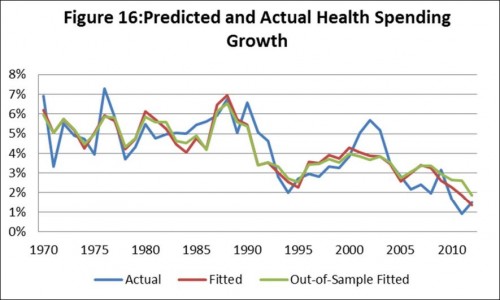 For all that, there’s plenty of room for additional considerations, commentary, speculation, and shoulder shrugging: You’ll notice that actual health spending growth (blue line) is below the fitted (red line) in recent years. That opens up the possibility that some other factors are playing a roll. (It could be noise too. The fitted line can’t match the actual in every year.)

Also, relating health spending growth to GDP doesn’t illuminate the mechanism(s), which can change over time. As the economy tanks, do health systems invest less? Does cost sharing go up? What’s the roll of prices vs. utilization, and how might those vary by payer (recognizing that Medicare and Medicaid control prices more tightly than private payers)? Even if one can answer all those questions, there’s no guarantee that the mechanisms at play over the last decade will be the same ones that dominate going forward.

In the long-run, understanding the GDP-health spending connection isn’t as helpful as we’d like. Even long-run GDP projections are uncertain. Also, even if GDP (and lags thereof) predict a lot of health spending growth variation, small, systematic errors (that which they don’t predict) could compound into big ones over many years.

In conclusion, in large part we don’t know precisely how the cost curve will bend, if at all. The evidence clearly shows we could bend it with a bad economy. Few would recommend that course.