Risk adjustment: “Bad risks” might be good bets for insurers

Considering they’re a relatively mundane quirk of insurance, Obamacare’s risk corridors have found themselves a fiercely-debated topic among politicians and writers who don’t seem to have known they existed six months ago. I wrote about the corridors back in October and have spent a fair amount of the interim thinking and reading about them, so you might understand why I’m bored—if not, it’s for the same reasons as Austin.

Risk corridors have lost their context. They’re one of three “shock absorbers” designed to spread risk around among the insurers, preventing carriers from trying to cherry-pick the healthiest (read: cheapest) enrollees. Risk selection is a problem that has plagued managed care in both Medicare and Medicaid, making these risk adjustment schemes a routine actuarial affair. The other two shock absorbers, risk adjustment and reinsurance, matter, too.

There’s a general belief that those who will be rescued by the 3Rs are carriers who end up with a disproportionate share of unhealthy enrollees. A report from Milliman (an actuarial and consulting firm) suggests that this intuition might not be quite right. Actually, it might be quite wrong:

[T]he extent to which issuers will be protected by these programs is not obvious because they interact in a complex manner. This paper explores the net impact of these programs, in particular risk adjustment, when members of varying characteristics are enrolled in a plan. In particular, we investigate the financial impact to a health plan of enrolling a membership base with different demographic and morbidity characteristics than those that were anticipated when developing rates.

The results of our analysis are, in most cases, the precise opposite of what one would expect without these programs. In several important ways, the nuances and interactions inherent in the 3Rs can generate impacts that actually turn traditional risk management practices upside down. […] Newborns and the elderly are the most profitable segments after building in the impact of the 3Rs. Notice that these same members would result in losses in the absence of the 3Rs. 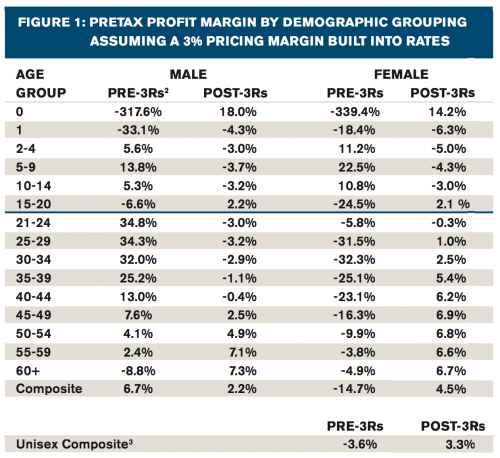 Milliman identifies several mechanisms underlying their counterintuitive findings. Risk adjustment works by using medical conditions to assign a “risk score” to beneficiaries; however, reimbursements for those conditions under the risk-adjustment model seem to exceed actual expected cost. Additionally, there is no interaction between risk adjustment (a permanent fixture of the ACA) and transitional reinsurance (which is phased out over three years). That lack of interaction means that insurers could be reimbursed twice for high-cost beneficiaries, something Milliman identifies as possibly intentional based on regulatory language. Deeper in the weeds, the risk adjustment math is based on statewide average premiums instead of average claims, which could distort reimbursement patterns.

There’s a key caveat to Milliman’s analysis: it depends on the broader aggregate (state-level) risk pools being balanced. That’s not to say that “balanced” hinges on the administration’s enrollment goals; the risk pools need to generally reflect whatever collective assumptions carriers made. Based on reactions from insurers to date—some positive, some negative, some neutral—this doesn’t seem entirely unrealistic.

Together, the 3Rs—but especially risk adjustment—introduce an underappreciated wrinkle into enrollment incentives. It’s critically important to enroll young adults into the aggregate market, but it’s much less important for any single insurer to recruit the youngest, healthiest consumers.

I’m not sure what these mixed incentives mean for outreach and enrollment. Who bears the burden of recruiting young adults if an insurer might make out better with a less healthy risk pool? Carriers don’t just market their products to specific consumers, they also design products around them (albeit with less flexibility under new ACA requirements). Given the current structure of risk mitigation, it could be in an insurer’s best interests to capture the older, chronically ill segment of the patient population—but only insofar as their competitors get stuck with the healthy kids.