I recommend the Institute for Clinical and Economic Review’s technology assessment of proton beam therapy (PBT), which concludes,

Also of note, PBT can cost at least twice as much the next best—or in many cases, comparable, and in some cases better—treatment modality, based on photons.

These are all points I’ve made before with respect to prostate cancer treatment. What’s new to me is the explanation of proton beam therapy physics in the report. 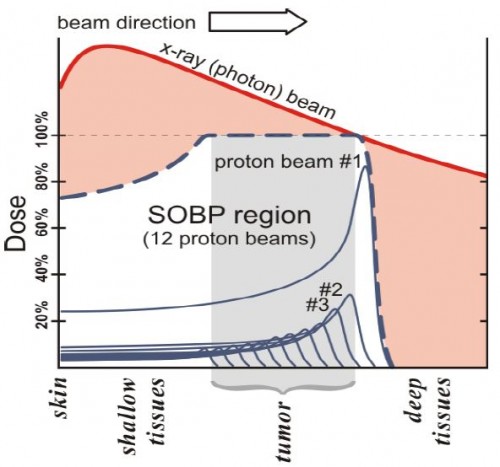 This certainly suggests a strong, theoretical case for the superiority of protons. Of course, whether it plays out that way is an empircal issue. But, there are some theoretical concerns as well.

Some concerns have been raised about the hypothetical advantages of the radiation deposition for proton beams. The dose range is relatively certain for tumors that are close to the skin, but there is more uncertainty around the end of the dose range when deep-seated tumors such as prostate cancer are considered (Goitein, 2008). In addition, a penumbra (i.e., lateral spread or blurring of the beam as it reaches the target) develops at the end of the beam line, which can result in more scatter of the beam to adjacent normal tissue than originally estimated, particularly at deeper tissue depths (Rana, 2013). Protons are also very sensitive to tissue heterogeneity, and the precision of the beam may be disturbed as it passes through different types of tissue (Unkelbach, 2007).

Another concern is the effects of neutrons, which are produced by passively-scattered proton beams and result in additional radiation dose to the patient. The location of neutron production in a PBT patient and its biologic significance is currently a topic of significant debate (Hashimoto, 2012; Jarlskog, 2008). In addition, while it is assumed that the biologic effects of protons are equivalent to photons, specific relative biological effectiveness (RBE) values of protons in relation to photons are not known with absolute certainty for all types of tissues and fractionation schemes (Paganetti, 2002).

Since the report is ungated, you can click through to follow up on any citations of interest.