Poverty, Homelessness, and the Social Determinants of Health

If much of health and health care spending is determined by social conditions, what can and should we do about that?

Policy wonks have a terrible habit of focusing on insurance and health system design… This gives short shrift to the “social determinants” of health—upstream factors related to lifestyle, environment, and socioeconomic status—that cannot be corrected by medical interventions. We’re fond of highlighting how much more the United States spends on health services, but an idiosyncrasy that receives less attention is how much less we spend on other social services. 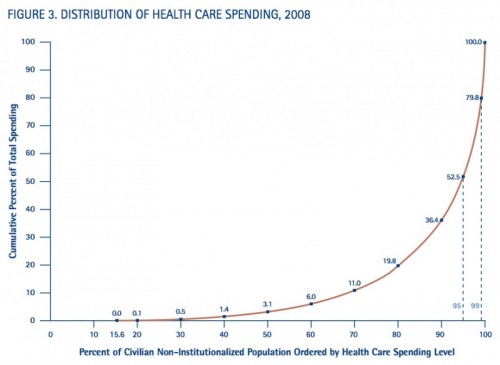 Five percent of the population accounts for half of health care costs. When you try to understand why these people cost so much, you learn that

The problem with the 5 percent is not simply that they’re extremely sick. It’s that they’re extremely hard to help. These people aren’t just ill. They’re poor. They have mental health problems. They’re dependent on wheelchairs. They have dementia or brain damage. They live in unsafe homes. They don’t have cars. They’re agoraphobic. They’re worn down by chronic pain. They’re stubborn. They’re flaky. They’re angry and they’re fearful. They’re bad at talking to authority and working through bureaucracies. They’re wary of the medical system and cowed by doctors who don’t seem to have time for them. They’re locked into bad habits and used to bad environments. Our health-care system can deal with the very sick… What we’re bad at is dealing with everything that happens outside the hospital — all the things that keep making these people very sick.

For example, many very premature infants are born to impoverished families. It’s possible that the stress of poverty contributes to the risk of prematurity. These children require long periods of care in highly expensive neonatal intensive care units (NICUs). These hospital stays are sometimes extended further because the NICU staff are concerned that impoverished families will be unable to manage fragile babies at home. In short, stressed living situations can increase the risk of illness and interfere with effective care.

What can we do about this? In a recent article in the NEJM, Kelly M. Doran, Elizabeth J. Misa, and Nirav R. Shah argue that

It’s time to broaden our thinking and spending to reach outside conventional health care silos. Social determinants of health should be central to mainstream discussions and funding decisions about health care. For many patients, a prescription for housing or food is the most powerful one that a physician could write, with health effects far exceeding those of most medications. We envision a Medicaid system in which spending on social determinants of health such as housing is not only allowable, but recognized as a best practice.

supportive housing for high-risk homeless and unstably housed Medicaid recipients. These recipients include not only people living on the streets or in shelters but also thousands boarding in nursing facilities, not because they need the level of care provided but because they lack homes in the community to which they can return.

The experiment isn’t finished and — unusual for an NEJM article — no data are reported. We don’t know whether the experiment will work. We should also think through what “working” means. On one view, it’s worth spending ‘health care dollars’ on housing the homeless if this causes a reduction in health care spending sufficient to pay for the housing costs, and not otherwise. On my view, to fully measure the success of this program we should also include the values of the reduced suffering of those who now live in adequate shelter, their improved health from living in shelter, their increased productivity, and the improved lives of their children.

The New York experiment will become even more relevant in 2014, when nearly all homeless people will become Medicaid-eligible in states that expand eligibility. Many of these people may join the ranks of the 5% of Medicaid recipients who account for 50% of Medicaid costs.

That is, the passage of the Affordable Care Act means that the American people have taken responsibility for the health care of the homeless. This will be a great challenge. And we should be proud that we have done this.