Please help me learn new things! – History of water and growth in So Cal (and maybe elsewhere)

This post is part of a series in which I’m dedicating a month to learning about twelve new things this year. The full schedule can be found here. This is month one. (tl;dr at the bottom of this post)

2016 is off to an amazing start. January’s learning topic was the history of water and growth in Southern California, but that quickly expanded to water development across the country.

I have to admit – when Emma Sandoe suggested this topic, I was a bit skeptical. I put it first because I knew I’d have less time for it than others. I figured I’d read a book or two, get the gist, and move on. Boy, was I mistaken.

Water development in the United States is fascinating. I knew nothing about any of it. There’s no way I’m going to be able to teach you everything I learned this month, but I’m going to try and give you the highlights as well as review the books I read as part of my journey. Let’s begin:

First up was William Mulholland and the Rise of Los Angeles. Emma, forgive me, but I did not enjoy this book. It’s the life story of William Mulholland, who is more responsible for moving a gazillion gallons of water to Southern California than probably anyone else. He helped to get lands irrigated and constructed the major aqueducts in the late 19th and early 20th century. If this was the only book you read on the topic, you’d think Mulholland was a hero, who brought water to people who were dying of thirst. He fought bad bureaucrats, engineered masterpieces, and was unfairly maligned when things went wrong. More importantly, he took the desert of Southern California and made it a paradise. I finished the book and wondered what the controversy was. What’s the problem with water in Southern California?

It literally wasn’t until I got to the final few pages of the book that I realized it was written by his granddaughter. That would have been good to know at the start. I think she might be a bit biased. 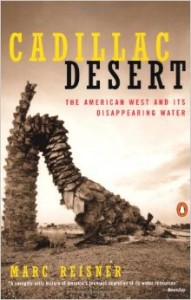 My dislike for that book, however, was dwarfed by my absolute love for the second. Cadillac Desert: The American West and Its Disappearing Water, by Marc Reisner, is a masterpiece. This is the book that blew my mind and forever changed the way I thought about water in the US. In no particular order, here’s some of what I learned:

Seriously, I could do this all day. Reisner shows how the Bureau of Land Reclamation and the Army Corps of Engineers, in a pissing contest, dammed up the whole country. In doing so, we destroyed ungodly numbers of species and ruined wildlife and the land. I always pictured companies and pollution as the enemy of the environment, but they’re not. The real bad guys are dams. We did this.

It’s also established the craziest form of welfare I’ve seen in recent memory. Our tax dollars paid for these dams. Billions. Then we pump the water to farms where we sell it to farmers at hugely subsidized rates. We make it so cheap (again with tax dollars) that people HAVE to waste water. It just makes economic sense. There’s so much cheap water around that they grow water-wasteful crops we don’t need. It’s horrific. Some companies have found ways to create paper farms to rig the system. These are people who you won’t think of being “on the dole” but they are in the worse way.

When you read of Mulholland in this book, it’s a totally different guy. There’s a vignette about him talking about Yosemite that will make your hair curl. It was worth reading the book just for that.

One more thing before I move on. As much as you might hate dams, there’s an argument to be made that we won World War II because of them. When we finished building the Bonneville and Grand Coulee dams, they almost immediately became capable of producing 900,000 kilowatts of power. That’s almost incomprehensible. Before that, the amount of aluminum in the United States was almost negligible. It simply cost too much energy to make it. That is, until those dams were built:

After France capitulated, England was left hanging by a thread. It was rescued by a European sky suddenly full of American planes. The Columbia River was a traffic jam of barges carrying bauxite to the smelters in Longview, Washington. By the middle of the war, almost half of the aluminum production in the country was located in the Northwest – nearly all of it going toward the war effort. American planes were being downed almost as fast as they could be produced. German planes, however, were being downed faster than they could be produced. The Nazis had neither the raw materials nor the electricity to produce what they needed fast enough.

They kept installing turbines, the dams were so big. But the end of the war, the Grand Coulee alone was generating more than 2.1 million kilowatts of power. That’s so much that it could also power a secret installation at the Hanford reservation, which needed maybe 160 megawatts of electricity to make the plutonium-239 needed to build an atomic bomb. There’s an argument to be made that it’s those dams that won us the war.

My only issue with this book is that it ends in the early 90’s. There are dire predictions contained within it. What happens now?

I tried to get my answers in the next book I read, The West without Water: What Past Floods, Droughts, and Other Climatic Clues Tell Us about Tomorrow, by B. Lynn Ingram and Frances Malamud-Roam. It was a mistake to read that after Cadillac Desert. It just couldn’t compare. I learned nothing new, and I was, once again, bored. I’m sorry. It was much better than the Mulholland book, but any book that followed Cadillac Desert was going to be a letdown. I also read Crabgrass Frontier: The Suburbanization of the United States, by Kenneth Jackson. That book was less about water, though, then it was about the creation of suburbia and how transportation changed the way we live in and around cities. It was ok, but I was still looking for answers about water. If you’re into history and urban planning, though, you might love it. 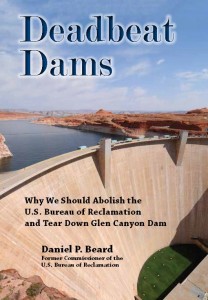 I hit paydirt in the last book I read, Deadbeat Dams: Why We Should Abolish the U.S. Bureau of Reclamation and Tear Down Glen Canyon Dam, by Daniel Beard. He’s a former Commissioner of the Bureau of Reclamation, and he’s seen the light. His book (which is much shorter than the rest), picks up where Cadillac Desert leaves off. He recognizes the genius of that book – and cites it often – and spends his time focusing on the politics and behavior associated with dams and water management rather than the science.

He’s chock full of anecdotes and stories about how when it comes to water, all fiscal and common sense go out the window. It’s not a Republican or Democratic thing; all politicians lose their minds when water and dams come into play. He cites some convincing data that the rainfall seen in the West in the nineteenth and much of the twentieth century was an anomaly. Droughts really are the norm. There are some tough decisions to be made. One of the big ones that Beard advocates is to start taking down dams. That will be hard, but he thinks it can be done with independent commissions, much like we do with old military bases. He thinks this would also do wonders for the environment. I can’t help but agree.

He also makes a convincing argument that with conservation measures, cities will likely be fine. What has to end are the farms. The massively subsidized irrigation and waste, which consumes the vast majority of the water consumed in the West, is unsustainable. We can’t afford it, and we simply can’t keep delivering it.

January was AWESOME. I learned so much. My wife Aimee is probably tired of hearing me talk about water, but I’m so glad I’m doing this. On to February. Wine!

P.S. Michael Hiltzik was also kind enough to send me Colossus: The Turbulent, Thrilling Saga of the Building of Hoover Dam, but I received it too late to finish it in time. I’m looking forward to reading it, soon, though!