None of you can troll me like Austin can. Also, cell phones and cancer. Again.

Seriously, he’s got more game than all of you combined:

This is from the STAT News email** he sent me.

Now, to the study (which may not be even be published yet). It was a rat study. They exposed pregnant rats to whole body CDMA- and GSM-modulated radiofrequency radiation, for 9 hours a day, seven days a week. Then they exposed 90 pups of each sex to each to three levels of each type of radiation for up to 2 years (12 groups of 90). They had controls (2 groups of 90).

The pregnant rats who were exposed to this had no differences in the percent of dams littering, the size of the litters, or the sex of the pups. It appears that pups born to the exposed rats were smaller, but no statistics are presented, so I can’t tell if the differences are significant. Early in lactation, though, these differences disappeared. No further weight differences were seen for the rest of the study.

Now let’s get to brain cancer. There were no significant differences in the incidences of lesions in exposed male rats compared to controls. There was a “statistically significant positive trend in the incidence of malignant glioma (p < 0.05) 16 for CDMA-modulated RFR exposures.” Not GSM, though.

No differences were seen in the female rats at all.

The cardiac schwannomas were more compelling, but again, only for males. No differences for females.

Where to begin? I didn’t see any sample size calculation, nor any discussion of what they expected to see. One of the reviewers did a power calculation for them (page 37) and found that based on 90 rats per group, the power was about 14%. This means that false positives are very likely. The cancer difference was only seen in females, not males. The incidence of brain cancer in the exposed groups was well within the historical range. There’s no clear dose response. Why schwannomas? Schwannomas in other locations than the heart were not significantly different. These are rats. I don’t know how this compares to real world exposure. And one more thing – the survival of male rats in the control group was relatively low, and if these tumors developed later in life, this could be the whole reason for the difference. 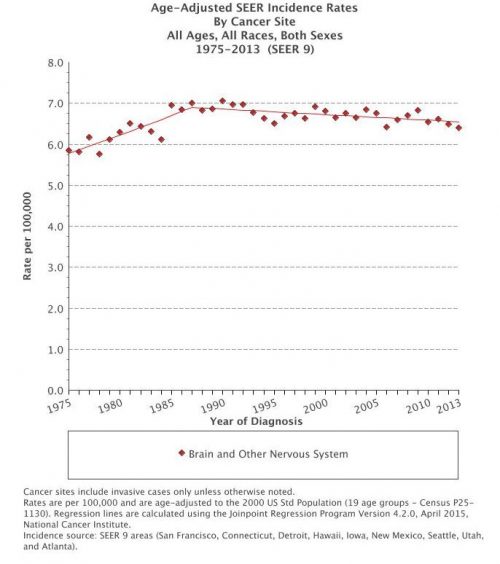 Cell phones are UBIQUITOUS in the United States. If they were causing cancer, we would expect to see rates of cancer going up, right? That’s not what we’re seeing. They’ve been decreasing since the late 1980’s. At least when we talk about vaccines and autism, the rates of the latter went up as we increased the former. With cell phones, there’s an inverse relationship. What’s going on?

And why does the media keep doing this?

**The actual article from STAT News by Megan Thielking and Dylan Scott is much more balanced and nuanced than the headline would signal. I wish whoever wrote the headline had toned it down.

P.S. Read this. Watch this: