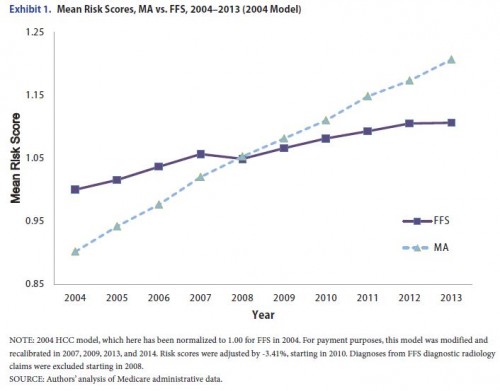 Maybe the increase in MA risk scores relative to fee for service (FFS) Medicare is due to compositional changes. Do changes in the mix of MA enrollees explain it? Nope.

On average over the 2004–2013 period, caseload dynamics had virtually no net effect on the difference between MA and FFS in the rate of growth of risk scores.

If MA enrollees were actually getting sicker, we might expect their death rates to grow relative to FFS. Do they? Nope, the opposite, actually.

Mortality rates declined somewhat more rapidly in MA than in FFS from 2004 to 2012, providing no support for the hypothesis that the underlying morbidity of MA beneficiaries increased relative to FFS.

But how is it that MA is able to pull off this upcoding, relative to FFS?

FFS diagnoses are drawn only from health care claims submitted for payment. MA plans may also review medical records and can report all diagnoses that are supported in the record, including those that were not reported by physicians on any health care claim or encounter record. MA plans can also employ nurses to visit enrollees in their homes to conduct health assessments and report diagnoses that are found. […]

FFS coding is known to be both incomplete and variable. Incomplete coding is evidenced by lack of persistence in coding of chronic conditions. For instance, among Medicare beneficiaries diagnosed with quadriplegia in one year, only 61% had a diagnosis of quadriplegia reported in the subsequent year (Medicare Payment Advisory Commission, 1998). Coding intensity also varies geographically; in the Hospital Referral Regions (HRRs) with the most intense practice patterns, the probability that a beneficiary is diagnosed with three or more chronic conditions is double the probability in low-intensity HRRs, with no evidence of differences in underlying prevalence.

Could upcoding be a good thing? The authors offer that it’s possible, but they don’t believe so.

Coding more carefully may have real health benefits. Better identification of problems and better documentation of problems that have been identified could improve the quality of treatment provided and may even lower costs—or they may lead to unnecessary treatment and higher costs. In either case, however, the purpose and design of the risk-adjusted payment system is not to improve the quality of coding. It is to ensure that plans are paid according to the health of the patients they enroll. It is unlikely that the increased payments achieved by plans through increased coding intensity are related to substantial health benefits that better coding might produce.

This is the system. Plans get paid for sicker patients, according to codes. I don’t blame them for trying to code more completely (so long as it’s not outright fraud) and collecting more payment for it. I’d do it, were it my line of work. But, to the extent that it results in inefficient use of taxpayer resources, I also think it’s perfectly fine for the government to try to claw back some of that payment, and it does so.

How much plans really upcode and how much the government should claw back  is a contentious, political issue, but one amenable to evidence. That evidence strongly suggests higher coding intensity with no increase in actual illness burden among MA enrollees. This is not a good reason to pay plans more, even if they are somehow deserving of higher payments for another reason (not that I believe that).