Freaking out about salt?

We are great fans and friends with the fine folks over at Vox, but I feel like this piece from Sarah Kliff was designed to make go ARGH. “We’re eating too much salt. And it’s killing us“:

The world has an increasingly high taste for salty foods — a taste that new research suggests leads to to 1.65 million excess deaths annually.

The massive study, overseen by 10 researchers working in Boston and London, brought together two important data points. First, they looked at what we know from prior studies of how much salt increases the risk of death from heart disease. Then they looked at how much salt each country is consuming.

Pulling those two data sets together, they found that too much salt consumption kills more than a million people each year, with death rates the highest in low- and middle income countries.

If you read the piece, you’ll see the very common meme that (1) salt is deadly, (2) our use is increasing, and (3) did I tell you that salt is deadly? No mention, though, of the fact that too little salt was associated with an even higher risk of death than too much salt.

Then Sarah hits with this:

We’re consuming nearly twice as much sodium as recommended

The World Health Organization recommends consuming no more than 2 grams of sodium daily. (That works out to about 5 grams of salt, which is a compound of sodium and chloride.) The WHO set this level using research about how much sodium consumption can lead to risk of heart disease or death.

Using urine samples taken from 1.38 million people across the globe, the researchers in this study found that the average person now consumes 3.95 grams of sodium daily, nearly twice the recommended amount. High consumption is pretty much an international norm: 181 of the 189 countries studies exceeded the recommended intake.

But – again – the study found that those who consumed salt at the levels the WHO recommended had higher rates of death and cardiovascular disease. So why is this a bad thing?

Finally, she had this (chart from the IOM) as a warning:

Over the past 40 years, the percent of Americans who consume more sodium than recommended has gone up. 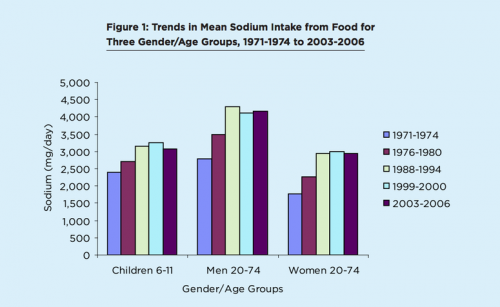 First thing to note is that the average sodium intake for all groups was in the safe zone. But how do you look at this as a concerning trend? From 1988 until 2006, sodium intake levels have been flat. That’s an 18 year period, and, if I’m reading the chart right, the levels in 2003-2006 were lower than that for 1988-1994 for all groups. Sarah notes that from 2003-2010, there have been no changes in the number of Americans who consume too much salt, either, so it’s really a 22 year plateau.

Where’s the crisis? Why only focus on the top end? Why continue to promote WHO guidelines that may be harmful?

Sarah and I go way back, to a point when neither of us was covering this beat. I’m a big fan. But I have to poke her with a stick here. That’s how I show my love.