Maybe I was wrong about ACOs

It was at the 2009 AcademyHealth Annual Research Meeting in Chicago that I learned about accountable care organizations (ACOs). The day after leaving the meeting, I was already concerned:

[I]f the U.S. health care system moves toward an ACO model we will see greater provider consolidation, all other things being equal. Provider groups’ greater market power to negotiate higher payments will be a countervailing force against the promise of the ACO model to provide higher quality care at lower cost.

I have not been alone in harboring this reservation about ACOs. For years, I and others have viewed ACOs as one of several legal and regulatory motivations for provider consolidation. The logic goes like this: the ACO model encourages the provision of more coordinated care for a population of patients. In addition, it rewards provider organizations for higher quality and lower costs. Historically, all of these are have been justifications for provider consolidation, including the horizontal integration of hospitals, the horizontal integration of physician practices, and the vertical integration of hospitals and physician groups.

But, a recent paper by Hannah Neprash, Michael Chernew and J. Michael McWilliams suggests this logic may be flawed. By comparing changes in provider consolidation from 2008–2010 to 2011–2013 between markets with higher versus lower Medicare ACO penetration (as measured in 2014), they found no evidence of a change in the trend toward consolidation associated with ACO adoption.

The chart, just below, summarizes the main findings. Though vertical integration of physicians with hospitals (left panel) and physician group size (right panel) both increased over the study period, the rate of growth for both was identical across quartiles of 2014 ACO penetration. Here, ACO penetration is measured at the metropolitan statistical level as the proportion of Medicare beneficiaries attributed to an ACO. 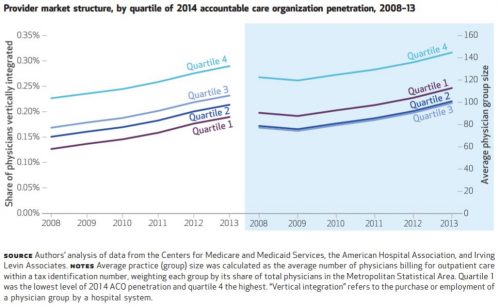 Many other measures assessed by the authors — changes in physician market concentration, hospital market
concentration, and commercial health care prices — are consistent with the hypothesis that the Medicare ACO model did not encourage consolidation. However, mean physician group size grew more rapidly for physicians participating in an ACO, relative to physicians who did not.

From this evidence, it seems I was (and others were) wrong to blame ACOs for consolidation of health care providers … maybe.

These findings suggest that new payment models may have triggered some consolidation as a defensive reaction to the threat these models could pose, rather than as a way to achieve efficiencies in response to the new incentives. Hospitals and specialists in particular might consolidate both horizontally and vertically to achieve sufficient market share to resist payer pressure to enter risk contracts or weaken ACOs’ ability to exploit competition in hospital and specialty markets, to compel reductions in prices and service volume.

The upshot is that maybe the ACO model is influencing consolidation, just not in the way I and others had thought. Rather than consolidating to support the ACO model, providers may be doing so as a defense against it. It’s too soon to know for sure. More work needs to be done to gather evidence to support or refute this alternative hypothesis.