Marriage equality and the abuse of gay, lesbian, and bisexual children

The following is a guest post from Bill Gardner, a psychologist who studies the mental health service system for children. Bill is an American living in Canada and a professor of pediatrics at Dalhousie University (Nova Scotia) and the Ohio State University. Bill blogs at Inequalities, and you can follow him on Twitter at @Bill_Gardner.

America is talking about marriage equality for gay and lesbian couples. Let’s talk about why it really matters. I think it has a lot to do with culture and how culture matters for health. This matters particularly for children, but give me a second to get there.

The discussion about marriage equality has been, first, about legal rights for gay couples and, second, about whether being raised by same sex parents could be harmful for children. These are important questions, although in my view they have straightforward answers. My answer to the first question is that gay couples do have these rights, although they have historically been denied in law. On the second question, I see little evidence that children are harmed by being raised by gay parents. In the absence of convincing evidence of such harm I see no reason why the rights of gay couples to raise children should be abridged.

However, I don’t think that is why America is debating marriage equality. Marriage equality is being championed because its enactment will symbolize a cultural change: the rejection of the animus against persons with same-sex sexual preferences. Why are civil unions for gays and lesbians insufficient? Because, historically, it was the (false) moral stigmatization of same sex preference that disqualified them from being married. In the same way, no morally sane 21st century American would view civil unions for inter-racial couples as an adequate substitute for the right to marry. Even if civil unions provided identical rights, laws forbidding inter-racial marriage would be offensive because they would give succour to racism.

And why is campaigning against the animus against GLBT people so important? It isn’t a matter of an abstract desire for a culture of equality or concern for the hurt feelings of a minority. The animus against GLBT people has motivated their abuse, and suppressed public acknowledgment of such abuse, since time out of mind. The consequences have been particularly abhorrent in the case of children.

Mark Friedman and his colleagues have published a meta-analysis in the American Journal of Public Health that looked at whether sexual minority adolescents were more likely to experience childhood sexual abuse, parental physical abuse, and peer victimization. Again, these abuses are not matters of hurt feelings: they are often crimes, and even where they do not result in direct physical harm they are powerful risk factors for educational failure, mental illness, and physical illness.

Moreover, these are not uncommon problems. The first graph shows the prevalence of parental physical abuse (the percentage of youth who report that they have suffered such abuse) depending on the child’s gender and sexual orientation. The prevalences are estimated based on data pooled across all available studies. The second and third graphs show the prevalences for sexual abuse and peer victimization. 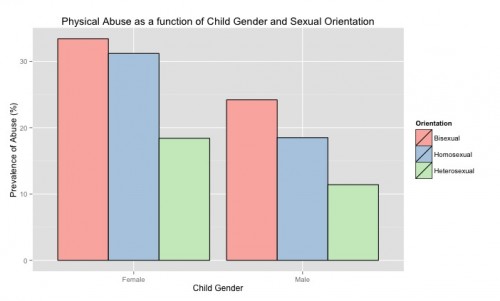 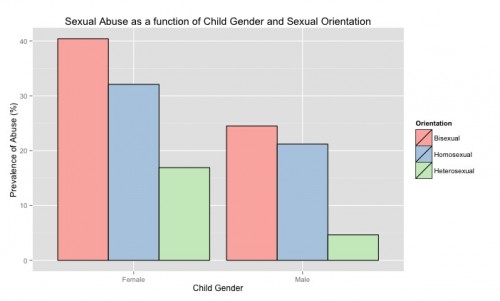 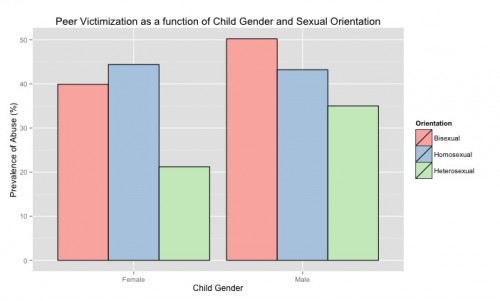 The graphs are disturbing first in that they reveal how commonly even the heterosexuals are abused. But the levels of abuse in sexual minority kids are staggering: see, for example, the levels of sexual abuse reported by lesbian and bisexual girls.

So, we want to rid the culture of animus against gays and lesbians because these people have been unprotected targets of abuse as children (among many other reasons). This doesn’t mean that I think that people who believe that there are moral objections to same sexual behaviour necessarily condone the abuse of children. Neither do I believe that their sincere beliefs should mocked or dismissed. Everyone deserves to be treated with civility and respect. But let’s keep what is really at stake here in perspective. We are trying to reverse the history of abuse of gays and lesbians, including children.