Laid Off Dads, Laid Off Moms, and Child Abuse

What happens to children when their parents lose their jobs? My intuition is that job losses stress families and put children at increased risk of child abuse. But Jason Lindo, Jessamyn Schaller, and Benjamin Hansen have surprising data saying that the answer is more interesting than that.

Previous data suggested that my intuition was wrong and that hard economic times have little influence on child abuse. For example,

Despite the onset of our most recent recession and the declines in family income that followed, victimization rates have actually fallen slightly from 2007 to 2010 (from 9.6 per 1,000 children to 9.2 per 1,000 children)…

The graph below shows the association between unemployment in California (the broken lines) and four measures of officially-reported child abuse (the solid lines). 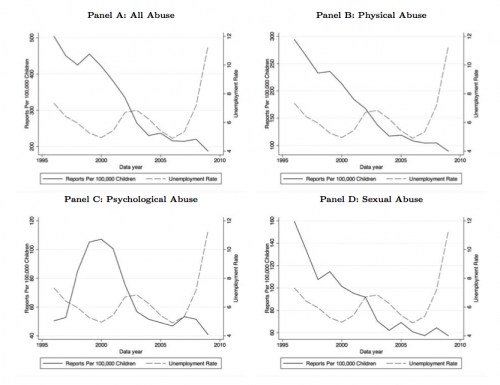 Notice, for example, how unemployment rockets up starting in 2007, but child abuse rates do not. (This lack of association may have occurred in part because the recession reduced the ability of the state to find and report child abuse. However, I don’t think this was a threat to Lindo’s analyses.) 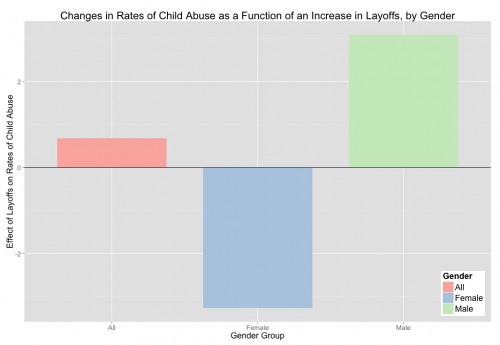 The pink bar on the left represents a 0.68% increase in child abuse associated with layoffs of all workers. This increase was so small that it was not statistically different from zero. The blue and green bars, however, are the effects of layoffs of female and male workers respectively. They show that

So layoffs have large and opposite effects on child abuse, depending on whether men or women are laid off.

So much for my intuitions: I thought the story was about stress, but it is also about time and gender. This study tells us to look at how the effect of a treatment or a risk factor varies depending on the person it is applied to. This is why research study populations should be as diverse as is practicable. When it makes sense, we should include both adults and children, or men and women, and carry out the analyses that look for heterogeneity of effects. This is the motivation behind personalized medicine: finding out what works for whom.

The policy upshot of some previous research on unemployment and child abuse was that although reducing unemployment is a very good thing, it probably won’t do much to reduce child abuse. This study doesn’t change that conclusion. But it does suggest that we need to do a better job of socializing men to be authoritative, effective, and non-abusive parents.