A reader pointed me to the Kaiser Family Foundation’s 2011 Medicare Primer:

This primer provides an overview of Medicare spending trends, how the program is financed, and factors contributing to the growth in Medicare spending.  Medicare now covers 47 million seniors and younger people with disabilities, with total expenditures of $524 billion in fiscal year 2010, representing 15 percent of federal outlays.

I found a few points worth highlighting. The first involves the section discussing what accounts for the rising cost of Medicare. One complaint I always hear is how the inefficiencies and waste of government are responsible. Not so (emphasis mine):

The costs of administering the Medicare program have remained low over the years – less than 2 percent of program expenditures. As such, program administration is not a contributing factor to Medicare’s expenditure growth.  Administrative costs include all expenses by government agencies in administering the program (HHS, Treasury, the Social Security Administration, and the Medicare Payment Advisory Commission).  Also included are the cost of claims contractors and other costs incurred in the payment of benefits, collection of Medicare taxes, fraud and abuse control activities, various demonstration projects, and building costs associated with program administration.

Compare this to Austin’s post on the administrative costs of private insurance.

There’s also a nice chart on the PPACA’s expected effect on Medicare spending over the next decade, compared to other legislation: 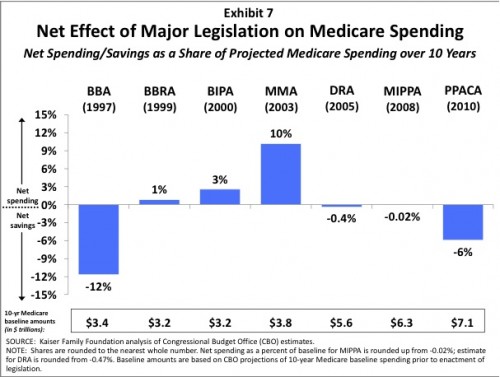 With the exception of the Balanced Budget Act, the PPACA is most comprehensive Medicare cost control passed in the last few decades. Much of that comes from reduced payments to providers and Medicare Advantage Plans, the Medicare Independent Advisory Board, increases in beneficiary premiums, delivery system reforms, and new taxes. They aren’t all popular, but they were all enacted to make Medicare more affordable to the government.

I’ve seen a lot of people hammering the President over the weak deficit controls of his recent budget, especially with respect to entitlement programs. It’s worth remembering that he did sign a law less than a year ago to reduce spending on Medicare by over $400 billion over the next decade.*

The whole thing is worth a read.

*Yes, they will use that money to pay for the rest of PPACA. I’m not double counting it. I’m one of those crazy people that thinks it’s OK for good things to cost money, so I’ve never had a problem saying that the PPACA will cost $938 billion over a decade. Here, I’m pointing out that Medicare is not the untouchable program many claim it to be. And yes, these projections require Congress not to change them. All laws do. That’s how the system works.