It’s not the video games

A number of you have taken exception to my defending video games against charges of causing violence. You’re sure I’m wrong. When I come up against deep-seated beliefs like these, I’ve learned it’s often a waste of time to try and convince you with studies. But here are some facts nonetheless.

It’s true that Americans spend billions of dollars on video games every year and that the United States has the highest firearm murder rate in the developed world. But other countries where video games are popular have much lower firearm-related murder rates. In fact, countries where video game consumption is highest tend to be some of the safest countries in the world, likely a product of the fact that developed or rich countries, where consumers can afford expensive games, have on average much less violent crime. 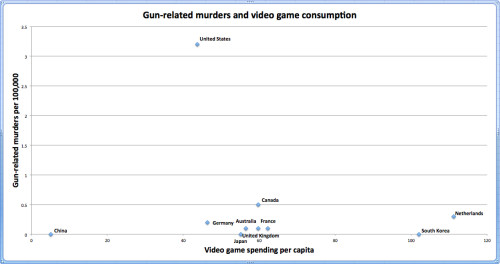 That’s video game spending per person on the x-axis and gun related murders per 100,000 people on the y-axis. Do you see a nice relationship between video game consumption and gun violence? Cause I don’t. I just see horrific gun violence in the US.

More from Erik (emphasis mine):

They found that the games had no impact on aggressive behavior whatsoever, and that the group which played no game at all was the most aggressive after the task, whereas the group that played the violent games were the least hostile and depressed.

There are many other studies which come to the same conclusions – or lack of conclusions – about the risk of violent video games affecting behavior in real life.

Many social and behavioral researchers point out that violence in the home and poverty are better indicators of anti-social or violent behavior.

From a piece in The Economist Erik points to:

The opposition to gaming springs largely from the neophobia that has pitted the old against the entertainments of the young for centuries. Most gamers are under 40, and most critics are non-games-playing over-40s. But what of the specific complaints—that games foster addiction and encourage violence?

There’s no good evidence for either. On addiction, if the worry is about a generally excessive use of screen-based entertainment, critics should surely concern themselves about television rather than games: American teenage boys play video games for around 13 hours a week (girls for only five hours), yet watch television for around 25 hours a week. As to the minority who seriously overdo it, research suggests that they display addictive behaviour in other ways too. The problem, in other words, is with them, not with the games.

A longform piece in The Economist goes into more detail:

But as Steven Johnson, a cultural critic, points out in a recent book, “Everything Bad Is Good for You”, gaming is now so widespread that if it did make people more violent, it ought to be obvious. Instead, he notes, in America violent crime actually fell sharply in the 1990s, just as the use of video and computer games was taking off (see chart 2). Of course, it’s possible that crime would have fallen by even more over the period had America not taken up video games; still, video gaming has clearly not turned America into a more violent place than it was.

This graph was taken directly from the Bureau of Justice Statistics Website, and according to them violent crimes are at an all time low. Now the people at www.gamerevolution.com were kind enough to fill in the important dates along the timeline, such as the release of the PlayStation 1 and 2 and its two most controversial games Grand Theft Auto 1 and 3. As you can clearly see, the rate of violent crimes still went down, even after all the media hype and all the press.

Please understand that I can’t prove a negative. I cannot prove that a video game hasn’t upset or made some child somewhere more violent. But I can say that we’re having an awfully hard time detecting the relationship if it’s there. Video games are incredibly prevalent. Heck, when Call of Duty: Black Ops II was released a couple weeks ago, it did more than $1 billion in sales in 15 days. That’s one game. These things are popular. If they were going to make kids violent, we’d see it at a population level. Instead, we’re seeing the opposite.

Games are rated. Kids shouldn’t be able to buy them if they’re too young. Parents should get involved with these decisions. Personally, I agree with Erik that it’s a good idea for parents to play them with their kids. Even I – who love these things – have rules about what my kids can play. But I’ll be honest. I think I’m far more likely to let my kids play some of these games than to watch the news.

I understand why some people don’t like violent video games. I also understand why some people don’t like violent movies or TV shows. But before you start talking about censorship, I want to see some proof. I worry that if you decide (with no good evidence) that you don’t like my video games, and want them gone, then next you’ll come for my movies. Then, maybe, you’ll decide you need to come for my books. That will not do.