The Affordable Care Act expanded Medicaid eligibility, at least in the states that did not refuse it. But being covered by Medicaid will not get you access to healthcare unless the people providing the health service that you need accept Medicaid.

Janet Cummings, Hefei Wen, Michelle Ko, and Ben Druss looked at whether US counties had a substance use treatment facility that accepted Medicaid. Substance use disorder (SUD) is more common among the poor and treatment is expensive. Hence for many poor people, Medicaid coverage is essential for getting access to care.

Cummings et al. found that in large areas of the US, there are no SUD treatment facilities that accept Medicaid. The goldenrod counties in the Figure below have no outpatient treatment facility. 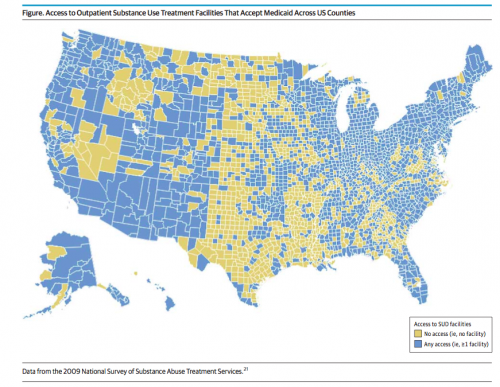 Forty percent of counties in the US do not have an SUD treatment facility that provides outpatient care and accepts Medicaid. Counties in rural areas are much more likely to lack access to outpatient SUD facilities that accept Medicaid, particularly those in Southern and Midwestern states. Our findings also indicate that gaps in the SUD treatment infrastructure are further compounded for areas with a higher proportion of racial and ethnic minorities.

Cummings and her colleagues found that counties with a higher percentage of Black citizens were substantially less likely (odds ratio = -3.1) to have a substance use facility that accepts Medicaid, even when you statistically control for the population density, poverty, and rural geography of the county. There is, therefore, de facto racial discrimination in access to substance use care for poor people.

It is not clear why some states lack SUD treatment facilities that accept Medicaid. Most counties in Texas and Nevada are sparsely populated, which might explain the lack of facilities. But so are large sections of Arizona, New Mexico, and Utah, and these states are much better served. It is possible that there are problems with Medicaid — for example, how much it pays for care — that discourage providers from opening treatment centers. But why are those problems with Medicaid so much worse in counties with lots of Black citizens? Why do those problems suddenly get worse at the New Mexico / Texas border?

The literature on access problems for Medicaid recipients is mixed, in part because of wide variation in the extent to which providers accept Medicaid payment (see here, here and here). However, Cummings’ data suggest that expanding Medicaid will not be sufficient to get poor people access to SUD care in many states. We may need to overhaul Medicaid, or replace it with a better system for insuring the poor. But there are also some states that need to ask themselves why they are failing to provide access to SUD care for their poorest residents.