An enormous literature documents that better off people are healthier than worse off people (entry points here or here). But that’s not the same thing as showing that transferring resources from the rich to the poor would improve the health of the poor.

In an ideal world — or at least in my ideal world — we would run controlled experiments that transferred resources to the poor to get objective evidence about the effects of redistribution. However, there are few if any such experiments. You can get close though, as shown by Hilary Hoynes, Douglas Miller, and David Simon in an NBER working paper.

Hoynes and her colleagues looked at the effect of a change in the Earned Income Tax Credit (EITC) on infant health. The EITC is a tax credit available to poor and middle income Americans. Moreover, if the credit is greater than your tax liability, you get a refund. The amount you get depends on the size of your family.

Of course, infants don’t earn income or receive tax credits. But their parents do and it is plausible that being born in a family that has received a tax credit would be to the infant’s advantage.

So how can we measure how much a poor infant would benefit from the family’s EITC? (WARNING: If you don’t care about the methods here, skip way down to the paragraph beginning “Hoynes and her colleagues looked…”)

The EITC was increased as part of the Omnibus Budget Reconciliation Act of 1993 (OBRA 1993). We could test whether there was an improvement in infant well-being in poor families after 1993. The problem, however, is that if we found such an improvement, it could have resulted from some other change that made the years after 1993 different from the years before. 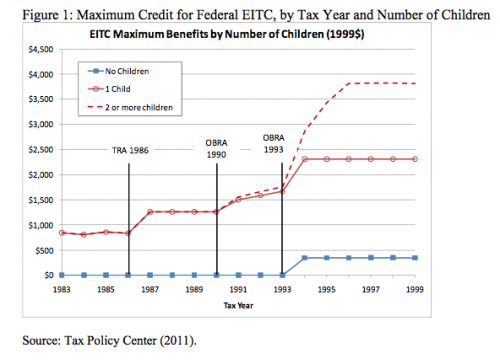 But the OBRA 1993 didn’t just increase the EITC, it also increased the size of the credit for families with two or more children relative to the credit for one-child families. So imagine four families.

and they could use this relationship to estimate the benefit to infants of the EITC. The key insight is that by comparing within-year differences in parity groups before and after 1993, they have controlled for other factors that changed across that span of history.

Hoynes and her colleagues looked at these patterns using US Vital Statistics data for birth outcomes. They found that

Low birthweight is likely a proxy for prematurity, which is much harder to measure. Premature infants are at risk for pulmonary, vision, and neurological problems. These problems can persist through childhood and adulthood. Premature infants can require expensive hospitalizations in neonatal intensive care units.

How would the EITC income improve infant health?

Our results suggest that part of the mechanism for this improvement in birth outcomes is the result of more prenatal care, and less negative health behaviors (smoking).

The bottom line is that redistributing income to poor families improves the health of their infants. It is, in effect, a form of prenatal care.

Thanks to Aaron Schwartz (@aschwattie) for the link to the Hoynes article.

UPDATE: Here’s an earlier and excellent post on Hoynes et al. by Brendan Saloner (@brendansaloner). How did I miss this, given that he posted it on a blog I write for? Umm…