How to scare people by focusing only on harms

I dragged myself out of bed this morning for day 59 of P90X3, and when I got back upstairs, I found my wife in a panic. Evidently, she had seen stories like this on Facebook:

Since she takes Benadryl regularly to help her sleep, she was now convinced that she was doomed to Alzheimer’s. My initial impulse was to roll my eyes, but I stopped because I want to remain married. Instead, I pulled up the study itself. It’s in JAMA Internal Medicine, “Cumulative Use of Strong Anticholinergics and Incident Dementia: A Prospective Cohort Study“:

Objective  To examine whether cumulative anticholinergic use is associated with a higher risk for incident dementia.

Design, Setting, and Participants  Prospective population-based cohort study using data from the Adult Changes in Thought study in Group Health, an integrated health care delivery system in Seattle, Washington. We included 3434 participants 65 years or older with no dementia at study entry. Initial recruitment occurred from 1994 through 1996 and from 2000 through 2003. Beginning in 2004, continuous replacement for deaths occurred. All participants were followed up every 2 years. Data through September 30, 2012, were included in these analyses.

Exposures  Computerized pharmacy dispensing data were used to ascertain cumulative anticholinergic exposure, which was defined as the total standardized daily doses (TSDDs) dispensed in the past 10 years. The most recent 12 months of use was excluded to avoid use related to prodromal symptoms. Cumulative exposure was updated as participants were followed up over time.

Researchers followed more than 3400 participants who were 65 years of age or older for an average of 7 years. They were interested in seeing if the use of anticholinergic drugs, especially really chronic use, was associated with an increased risk of dementia or Alzheimer’s. The top line results were that those who used anticholinergic drugs had a significantly increased risk (hazard ratio 1.54) of dementia if they had at least 1095 standard daily doses of these drugs. That’s where the “more than 50% increased risk” comes from.

These drugs are also all not the same. Here’s the full list of drugs: 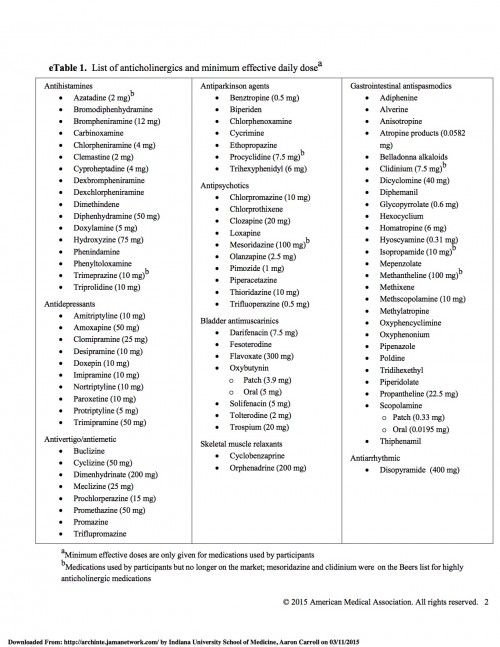 There are a LOT of drugs there, and they’re not all the same. Some are for serious problems! In fact, more than half of the people in the trial who were high users of anticholinergics were on antidepressants (not benadryl).

This is also a cohort study. It’s possible that people who took the drugs needed them for issues that made them more predisposed to dementia than the drugs causing dementia. We can’t establish causality here.

You also can’t forget that these were all people over age 65. That’s a very different population than 40-year-old women, which is what my wife and many of her friends on Facebook were considering.

But that’s not even what I want to stress the most. There are tradeoffs here. I imagine that many of the people in this study were taking antidepressants because they were depressed. I hope they were receiving a benefit from it. Some are for bladder control issues. I imagine the drugs benefit those people, too. And a good discussion to have with a patient would be whether the benefits received from these drugs outweighs the potential small increase in risk of dementia over the next ten years. I imagine many would choose to take the drugs.

I was diagnosed with ulcerative colitis about 20 years ago. At various times in my life, it’s been absolutely terrible. The negative impact on my quality of life was massive. About 5-6 years ago, I began to take a new drug. New for me, at least – it’s old, generic, and dirt cheap. It also carries with it a potential small increase in the risk of bone marrow toxicity. When I started the drug, my wife was panicked about this, even though I tried to explain that the risk was very small. I have to have my blood drawn quarterly to monitor things.

Years later, and still on the drug, I’m in remission. You’d never know I have ulcerative colitis. Words cannot adequately describe the massive, huge increase in my quality of life that this has given me. I’d pay almost anything for this drug (which is worth another post), and there is absolutely, positively no question that – for me – the benefits I receive outweigh the risks.

But if you only focused on the potential harms, then you’d never consider therapy. And I’d have totally missed out.