How flawed is life expectancy?

Life expectancy as a metric is so controversial that I felt it deserved further exploration.  People don’t like it because they think lots of things are getting in the way besides the health care system.  Some of the most commonly brought up examples are how we score miscarriages, or the fact that we have more homicides, car accidents, or suicides.

Yes, I know Betsey McCaughey made this argument on the Daily Show. She got it originally from an analysis done by Robert L. Ohsfeldt and John E. Schneider (published by the American Enterprise Institute ) for their book, The Business of Health: The Role of Competition, Markets, and Regulation:

The abnormally high child mortality rate obviously contributes to the abnormally low life expectancy at birth in the United States. But death rates among adolescents and youth can also have a dramatic impact on estimated life expectancy. In that light, it is important to note that some specific cultural aspects of American society largely outside the purview of the health care system contribute to rates of death from injury, both unintentional (accidents) and intentional (homicide and suicide). Rates of death from injury are usually high in the United States compared to other developed countries, which affects the apparent underperformance of the U.S. health system (as measured by life expectancy at birth), because deaths from injury disproportionately affect adolescents and young adults.

Those are fair points.  But do they alter things slightly or change how we perform greatly?

Yes, we have more, but the number of actual deaths pales in comparison to total deaths per year (almost 700 per 100,000 population).

We also have more deaths by accidents, but again, not in huge numbers.

Our suicide rate is actually such that it should help us.  But again, not a huge factor.

So let’s think this through.  What Ohsfeldt and Schneider did was calculate a regression to remove the effects from infant mortality, accidents, assault, etc. from the equation and recalculate the life expectancy (making us first).  But there are problems with this:

Carl Haub, a demographer at the Population Reference Bureau in Washington, D.C., said the method was incomplete. A more-precise analysis would have removed those who died from these causes from overall mortality stats, and then recalculated life expectancy. (For more on how life expectancy is calculated, see this earlier blog post.) “Just because another method is a lot of work, does not mean regression will yield a correct result,” Mr. Haub told me.

Prof. Ohsfeldt acknowledges that regression was chosen for its relative simplicity for what he called his “little book project.” And he agrees that some deaths that his book attempted to remove from the life-expectancy tables might be dependent on health-care systems.

If it’s the case that the miscarriages, accidents, and homicides are screwing us, because we lose many more people at a young age, then if we look at the life expectancy of people who make it out of the dangerous young years, things should look better.  In fact, in their book, Ohsfeldt and Schneider make this exact argument:

So let’s look at the life expectancy for 65 year olds.  According to the people who did the analysis for AEI, that’s the fairest way to assess life expectancy as a health care system population metric. 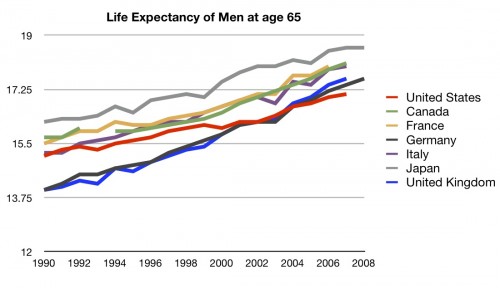 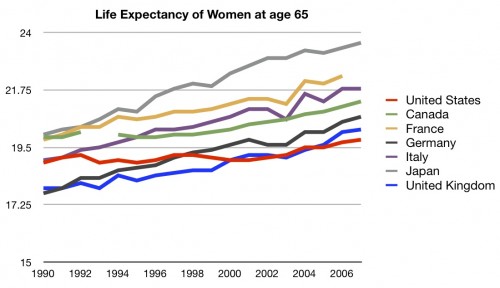 Still the worst in recent years.

Accept it.  Even if we look at life expectancy for sub-populations relatively less affected by the reasons people use to try and discredit the metric as a quality measure, we still look pretty bad.  Especially when you remember that people in the US over age 65 have much better access to the health care system overall, due to the universality of Medicare.  Moreover, even if you argue that the US is more dangerous, then don’t we really need a much better health system to keep us from dying?

You can’t blame all deaths on the health system, but that doesn’t mean we couldn’t use a much better one.