Yesterday, I made a plea over at CNN.com that we not cut Medicaid without considering how it might impact children, so many of whom are living in poverty. Last night, I saw a report from the CDC that provides some data to support my piece. “Health Insurance Coverage: Early Release of Estimates From the National Health Interview Survey, January–March 2011“:

The Centers for Disease Control and Prevention’s (CDC) National Center for Health Statistics (NCHS) is releasing selected estimates of health insurance coverage for the civilian noninstitutionalized U.S. population based on data from the 2011 National Health Interview Survey (NHIS), along with comparable estimates from the 1997–2010 NHIS. Data analyses for the January–March 2011 NHIS were based on 25,136 persons in the Family Core.

It’s not all bad news. For instance here are the percent of children who have been uninsured in the last 14 years: 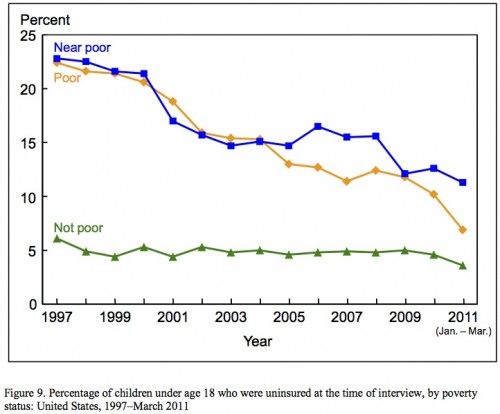 While I wish it were zero, we’ve made noticeable progress in reducing the number of poor and near poor children who lack insurance. For comparison, here’s how those age 18-64 have fared over the same period of time: 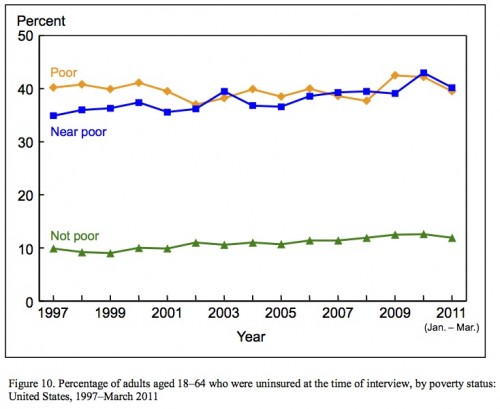 Not much improvement at all. The ACA should theoretically help these numbers, but not really until at least 2014. But if the number of uninsured children dropped so much, where did they get their coverage? 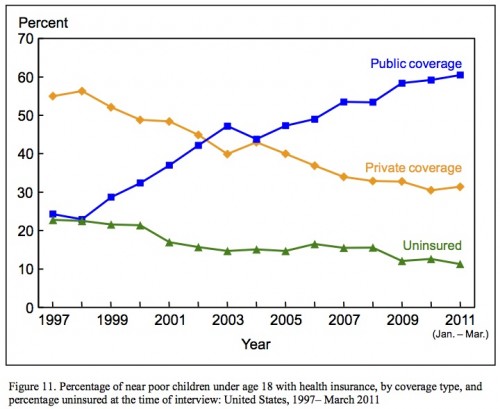 You can see the percentage of uninsured children trended down a bit. But the percentage with private insurance coverage also dropped – almost 24%. Those covered by public insurance, however, went through the roof. That’s SCHIP and Medicaid at work. Again, for comparison, here are the same trends in adults. 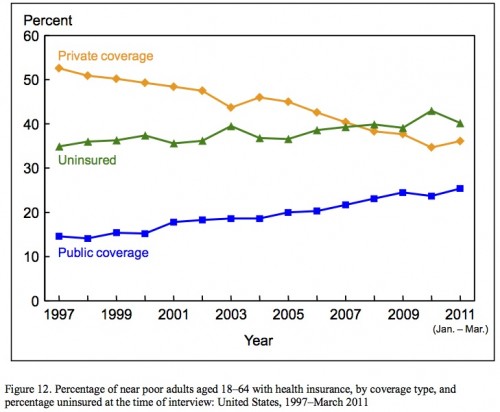 While private coverage has steadily dropped, public insurance has not picked up the slack in the same way. The number of uninsured adults has increased.

The number of children in the United States in poverty is deplorable. The number of uninsured children is also too high. Things are much, much better than they used to be, however. Cutting back Medicaid, in such a recession, when the likelihood of them getting private coverage is slim to none, would reverse so many of the gains we’ve made. Let’s not do that.