Though I am confident our health care system could be more productive, I’m skeptical that productivity growth in the sector has been negative, as has been shown in some estimates. The source of my skepticism is that those estimates do not account for changes in quality of health care products, which has likely gone up. Abe Dunn demonstrates this with respect to anti-cholesterol drugs. I did not slog through every detail of the paper, but here’s the gist: 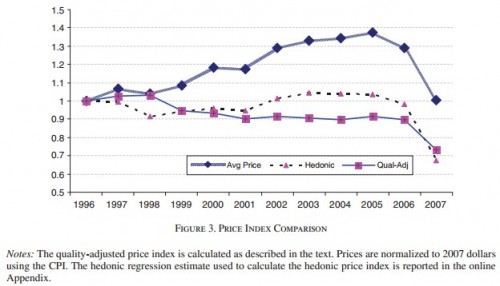 Except in the last two years of the sample, the quality-adjusted price of anti-cholesterol drug treatments has decreased relative to the (unadjusted) average price.

This [quality-adjusted] price index fell by 9 percent from 1996 to 2005, which contrasts sharply with the average price that increased by 37 percent […]. Thus, accounting for changes in quality appears to be very important for properly measuring prices in the market for anti-cholesterol drugs. This result highlights the potential importance of accounting for quality changes when measuring prices and output in the health sector where technology is a primary driver of expenditure growth.

About technology being the driver of health care expenditure growth, Dunn credits it with “as much as 50 percent” of the blame.

Based on studies by Newhouse (1992), Cutler (1995), and Smith, Heffler, and Freeland (2000), the Congressional Budget Office (2008) estimates that new technologies account for approximately 50 percent of cost growth in medical care in recent decades. A more recent study by Smith, Newhouse, and Freeland (2009) estimates that medical technology explains 27–48 percent of health spending growth since 1960.