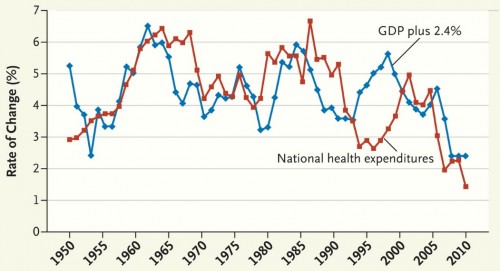 An examination of data from the past 60 years for the economy as a whole and for health care expenditures indicates that there has been a robust relationship between the two. It seems premature to dismiss the sluggish economy as the major explanation for the spending slowdown of recent years. In the line graph, the economy is represented by the gross domestic product (GDP), which is the total value of all goods and services produced in a given year or its equivalent, the total income received by all contributors to production (e.g., labor, management, and capital). The GDP and national health care expenditures are adjusted for population growth and general inflation. Between 1950 and 2011, real GDP per capita grew at an average of 2.0% per year, while real national health care expenditures per capita grew at 4.4% per year. The gap between the two rates of growth — 2.4% per year — resulted in the share of the GDP related to health care spending increasing from 4.4% in 1950 to 17.9% in 2011. Most experts believe that a gap of close to this magnitude over many future years would have catastrophic consequences for the federal government and the U.S. economy.

It was shocking to me how much of an effect that time had on health care spending. Say what you will about the backlash and the way it was handled, but health care spending growth over that period was held way lower than it otherwise might have been. Why? Managed care.

For those of you unaware of what happened then, there was a big push away from open networks and fee-for-service system towards insurance companies signing contracts with hospitals and physicians, with fees and reimbursement negotiated ahead of time. That was when we starting getting patients to pay more if they sought care out-of-network, and also when physicians began to be reviewed for their actions, and potentially sharing in the insurance risk if they spent too much and gains if they held spending down.

If that sounds familiar, it’s because much of it still stuck around, and more of it is incorporated into Obamacare. Look closely at the chart. What’s also interesting is that since the 90’s, in the last decade or so, health care spending growth has been back in relationship with GDP, but below it.

Maybe I’m being too pessimistic about the ability of these types of actions to slow down the growth of spending. It appears we may have learned some lessons from the 1990’s, and kept applying them into the last decade. Maybe reinforcing them in the coming years will continue to keep growth under GDP growth. Time will tell, but it’s possible.