Perhaps my favorite disconnect during the health care reform mess: 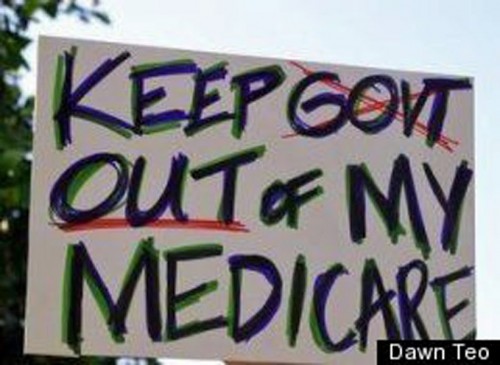 I teach a class to first year medical students on health policy and economics. It’s often one of the most rewarding parts of my job. Every year, there are a few students who stick around after class and ask questions; many of them are truly insightful.

Recently, a student challenged me by stating that taxes were a form of wealth redistribution; he thought that most states would rather do away with taxes entirely and stop giving money to others.

I find this argument odd in the same way that I do the sign above. Yes, federal taxes obviously move money from some states to others. States don’t get exactly the money back that they pay. But it seems that (1) the more conservative states would like to do away with federal taxes and redistribution, and at the same time (2) they are often taking in the most government spending.

But I wanted data. So I first went to the most recent Gallup poll on self-identified ideology by state. Using their data on “conservative advantage”, I ordered the states by the difference between the number of “conservatives” versus “liberals” in the state.  Next, I went to The Tax Foundation, which published a report in late 2007, on federal spending on each state versus the amount of federal taxes paid for each state.  I next drew a red line at $1. States above the line receive more money in federal spending than they pay in taxes. They are having wealth redistributed to them. States on or below the red line are not. At best, they are breaking even, and most are paying more in taxes than they get in spending. They are having wealth redistributed from them. I also put a green vertical line dividing the most conservative 25 states from the 25 most liberal ones: 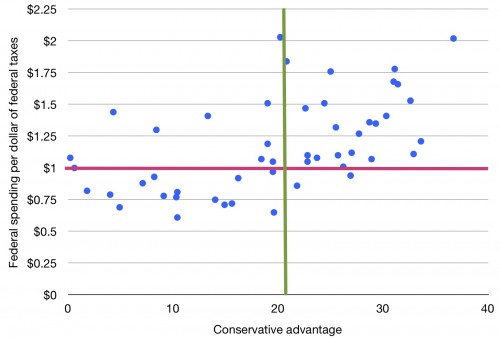 Now, I own that the data on taxes versus spending are old, but they are the most recent and the best I could do. Moreover, I have found nothing to make me believe there have been significant changes. I also own that this isn’t a perfect analysis, but until I hear otherwise, it seems to make sense.

I know people have a knee jerk response to dislike taxes and redistribution. But it seems like those most opposed to the idea of both of these things seem to be getting the most out of them.