Will health IT increase productivity in health care?

EMR implementation and networking could eventually save more than $81 billion annually—by improving health care efficiency and safety—and that HIT-enabled prevention and management of chronic disease could eventually double those savings while increasing health and other social benefits.

Productivity in the health sector is relatively low and raising it could go a long way toward addressing the rapidly growing US health budget, as the authors illustrate. 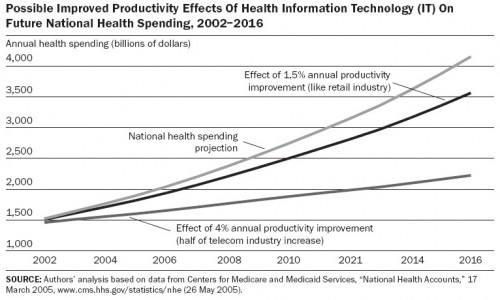 The authors advise caution in interpreting the estimated effects of EMR adoption, stressing they are reporting “potential savings,” by which they mean those “assuming that interconnected and interoperable EMR systems are adopted widely and used effectively.”

I’ll add my own word of caution: the study is not based on anything like a comparison (randomized or otherwise) between systems that have and have not implemented EMRs of the type assumed for analysis. This is, as is essentially admitted by the authors, a thought experiment about a world not like the one in which we currently live. (There’s nothing wrong with that. But it does threaten the generality of the findings.)

Here’s another cautionary note, this time from the CBO:

[T]he RAND study was based solely on empirical studies from the literature that found positive effects for the implementation of health IT systems; it excluded studies of health IT that failed to find favorable results.

In 2006, also in Health Affiars, Jaan Siderov [2] throws some more cold water on the idea that EMRs can produce the kind of productivity increases and savings Hillestad et al. suggest might be possible. Citing literature, he writes that

Siderov cites research in support of these statements. I’ve omitted them because there is an ungated version of Siderov’s paper available. However, all are just as plausible, if not more so, than the assumptions made by Hillestad et al. They suggest to me that much more than effective use of widespread, interoperable EMRs (or EHRs)* is necessary to achieve dramatic reductions in health spending and improvements in health. This sentiment is echoed by others as well (e.g. DesRoches et al. [3] in Health Affairs, 2010).

A lot of what must be done has nothing to do with information technology at all. That’s not to say health IT can’t play a role. It can. It just isn’t so clear that it will be the cause of whatever success we achieve (if any).

* I have glossed over the differences between EMRs and EHRs. One of the papers discussed uses the former, the other the latter. Do you think those distinctions matter to what they or I have written? If so, let me know.