Does the ACA deserve the credit (or blame) for rising deductibles?–ctd.

David Goldhill responded to my earlier post on the growth of high deductible health plans with fair-minded observations of his own, which you should read. I appreciate the discussion and his engagement on the subject. For his part, Aaron offered a helpful contribution last night. Here, I’d like to offer a few more thoughts on the subject.

Will the ACA cause an increase in some deductibles? Unequivocally, yes, especially among high-end plans in the employer market. There, the Cadillac tax will have the intended effect of discouraging first-dollar coverage. The answer for the individual market, however, isn’t as clear-cut.

Has the ACA already caused an atypical increase in the number of people in high-deductible plans? In my opinion, it’s not clear for either the individual or employer markets.

It’s important to recognize that high deductibles have been a fixture of the individual market for some time now. According to a 2009 AHIP survey, deductibles for PPO policyholders averaged $2456, which you can see in the table below. PPO was by far the most common plan type, with an average deductible roughly halfway between HMOs/EPOs ($1179) and HSAs ($3263), both of which had relatively low enrollment. For those reasons I will consider PPOs the typical pre-ACA individual market plan. 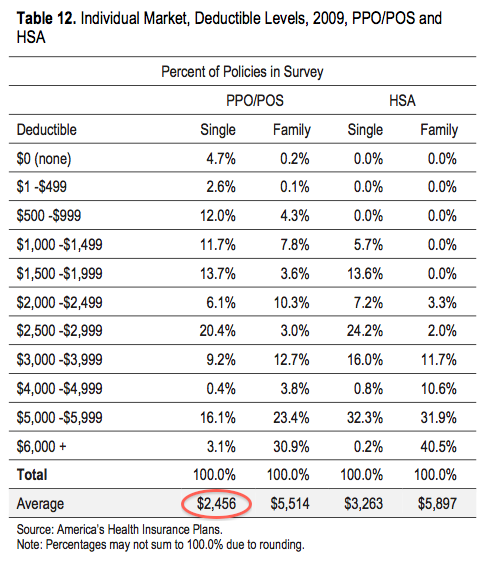 Now let’s look at what’s happened in the reformed individual market, under the ACA.

It turns out that the average deductible for a Silver plan in the ACA exchanges is $2907, which raises a very important point. Namely, the difference in average deductible between a current Silver plan and an old PPO plan really isn’t all that significant: $2907 versus $2456. Add in four years of inflation using the CPI and the 2009 figure becomes $2780.

According to recent enrollment data from HHS, nearly two-thirds (63%) of exchange enrollees have chosen Silver plans so far. Bronze plans have captured 18% of the market, Gold 11%, and Platinum 6%.

That means a majority of people enrolling in exchange plans are choosing coverage with deductibles similar to a typical plan in the pre-ACA individual insurance market. Dependent on income, some of these enrollees will also see their deductibles offset by cost-sharing subsidies.

In terms of Bronze deductible, Health Pocket calculated the average to be $5081. The Bronze share of 18% is very close to the 2009 share of plans with deductibles above $5000 (19.2% of the market). The enrollment patterns look very similar.

With all that said, I believe some people who had low deductibles before will choose higher deductibles now. And insofar as the current individual market is larger in size than the previous one, more people will be enrolled in what are technically considered high-deductible policies (above $1250).

But is that what we call a rapid spread of such plans in the individual market? Most exchange enrollees appear to be choosing policies on par with previous versions, at least in terms of deductible, so this is at least debatable.

So what about the employer market?

David pointed me to a recent employer survey by Mercer, a consulting firm. Employers were asked about the effect of the Cadillac tax on high-cost plans. 32% of respondents said they have raised deductibles or other cost-sharing provisions (but we don’t know by how much—it could be small). 41% have implemented a high-deductible plan over $1250. 33% of respondents said they have begun to steer more employees into high-deductible plans. These numbers seem to accord with David’s points.

But what they don’t tell us is also important.

The Mercer survey also doesn’t tell us what fraction of employees are currently enrolled in high-deductible plans, an important data point. Nor does it mention how many employers currently offer high deductible-only plans.

But we have an estimate for that number in a separate survey that David cited in his response. The PwC study, he wrote, shows “the number of companies considering HDP-only options almost tripling in one year.” In my view, that’s not quite what the cited page shows. 17% of employers currently offer high deductible-only policies, and 44% of employers are considering that for 2014. Those are two different measures—and there is a big distinction between considering something and doing something.

I do believe that the ACA is causing many of these changes. But is the employer trend more “rapid” than it was before? I don’t believe these surveys conclusively show that the movement toward high deductibles is accelerating.

Furthermore, medical deductibles aren’t the whole ball game. It’s important to look at overall actuarial value (AV) for plans, because coinsurance, copayments, and drug deductibles matter too. In 2010, 51% of enrollees had a so-called Tin plan, with an average AV of only 52%. In other words, in the previous individual market, many people paid heavily out of pocket, including on deductibles.

I share Aaron’s worry that high deductibles under the ACA could turn out to be harmful. I think that people just above the subsidy threshold are in a particularly tough spot, faced with a choice between high deductibles and unsubsidized Gold or Platinum premiums. There is definitely more we could do for that group.

I wrote this post in order to continue an interesting dialogue, rather than to criticize anyone. Thanks to David and others for the civil exchange of ideas.