Doctors in training may save lives

When I was a resident, or a doctor-in-training, I was often humbled by what patients would let me do to their kids. There were times when, literally, their lives were in my hands.

Sometimes, I’d feel a bit guilty. After all, was I harming patients by learning on them? I never knew.

Later, my views shifted. When my oldest child needed a lumbar puncture I didn’t ask for the attending in the Emergency Department; I asked for the resident. After all, I knew the resident was likely doing a number of these procedures a day, while the attending might not have done one for weeks. In this case, I felt having a resident involved was better for outcomes.

It would have been nice to have some research, though. That’s why I was happy to read this study recently:

Background: Although the training of surgical residents is often considered in national policy addressing complications and safety, the influence of resident intraoperative involvement on surgical outcomes has not been well studied.

Study Design: We identified 607,683 surgical cases from 234 hospitals from the 2006 to 2009 American College of Surgeons National Surgical Quality Improvement Program (ACS NSQIP). Outcomes were compared by resident involvement for all general and vascular cases as well as for specific general surgical procedures.

Here’s the gist. A bunch of researchers took a large database of patients who had operations all over the country, and looked at surgical outcomes based on whether or not a resident was involved in the procedure.  Here’s what they found: 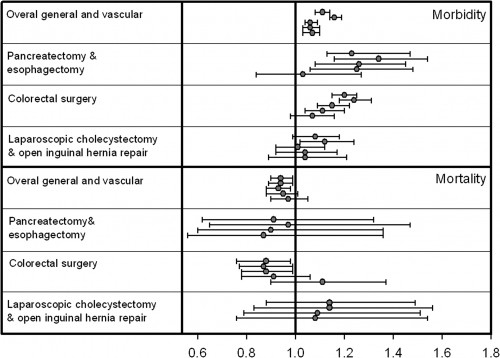 I know this is complicated, so I’ll walk you through the figure. The top four rows are morbidity and the last four rows are mortality. In each row you see four or five lines. These represent different models or analyses. Where only 4 models are seen, the last model was not available due to lack of convergence.

How much? It seems that having a resident involved in the cases led to about 6.1 additional morbidity events but 1.4 fewer deaths per 1,000 general and vascular surgery procedures.

In other words, there’s a pretty small effect of having a resident in the room. And there’s an argument to be made that it might save some lives. This isn’t a randomized controlled trial, and no causality can be proven, but this should make residents, those that train them, and patients feel a bit better about being part of the process.

Unfortunately, the whole study is behind a paywall, but the abstract is here: The Influence of Resident Involvement on Surgical Outcomes