Diversion of stimulants prescribed to adolescents

Too many Americans are dying from opioid overdoses and too many of those opioids were pharmaceuticals that had been diverted to non-medical use. According to National Institute on Drug Abuse Director Nora Volkow,

opioid analgesics are widely diverted and improperly used, and the widespread use of the drugs has resulted in a national epidemic of opioid overdose deaths and addictions. More than a third (37%) of the 44,000 drug-overdose deaths that were reported in 2013 (the most recent year for which estimates are available) were attributable to pharmaceutical opioids; heroin accounted for an additional 19%.

However, opioids are not the only controlled substances that are commonly diverted: it’s also a large problem with benzodiazepines, sleep medications, and stimulants. We have known about the diversion of stimulants prescribed for attention-deficit/hyperactivity disorder [ADHD] for a long time. But I had no idea just how big the problem is.

Sean McCabe and colleagues have a recent article on stimulant diversion in the Journal of the American Academy of Child and Adolescent Psychiatry.

Objective
To assess the prospective 17-year relationship between the medical and nonmedical use of prescription stimulants during adolescence (age 18 years) and educational attainment and substance use disorder (SUD) symptoms in adulthood (age 35 years).

Method
A survey was self-administered by nationally representative probability samples of US high school seniors from the Monitoring the Future study; 8,362 of these individuals were followed longitudinally from adolescence (age 18, high school senior years 1976−1996) to adulthood (age 35, 1993−2013). 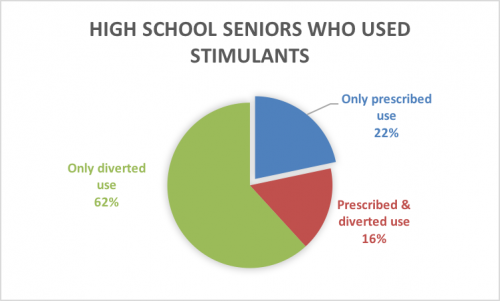 It’s striking that there were almost three times as many kids who only used diverted stimulants as there were kids who only used them as prescribed. Keep in mind that this is not a clinical or convenience sample: the authors used nationally representative probability samples. This is as good a description of stimulant use in the US adolescent population as we are likely to get.

Is non-medical use of stimulants by teenagers a major problem? Unlike diverted opioids, few people die from using diverted stimulant medications. This study does not have a design that can identify a causal effect of non-medical stimulant use. Nevertheless, the descriptive findings of this study are not encouraging.

Among past-year adolescent nonmedical users of prescription stimulants, 97.3% had used at least one other substance during the past year.

Moreover, the Monitoring the Future data allowed McCabe et al. to follow the high school seniors to age 35. The kids who used diverted stimulants as adolescents were doing less well as adults.

The finding that far more kids use stimulants non-medically than medically — coupled with the high rates of opioid diversion — means that our system for supplying pharmaceuticals is broken. In the future, I am going to have difficulty saying “`controlled’ substances” without sardonic quotes around ‘controlled’.