Did you know raising the Medicare eligibility age will cost America money?

If we drop 65 and 66-year-olds from Medicare, obviously that will mean the federal government is going to spend less on the program overall. They’ll save something to the tune of about $33.1 billion. But, they’ll be losing the premiums that those people paid for Medicare (about $9 billion), so that means the overall federal Medicare savings is $24.1 billion.

So far so good, right? Sounds like a winner. That is, of course, if you ignore all the extra spending we’d need to do because of this. Here we go.

Lots of those 65 and 66-year-olds will need Medicaid. That will cost the federal government about $8.9 billion. Lots of those seniors will go to the exchanges for insurance. That will cost the federal government about $9.4 billion in subsidies. Oh, that Medicaid will cost states too, about $700 million. The 65 and 66 year olds getting  insurance from their employers will cost them about $4.5 billion (they’re expensive). As I’ve reported before, Medicare premiums will go up ($1.8 billion), and exchange premiums will go up ($700 million). And, there will be increased out-of-pocket spending by the 65 and 66-year-olds themselves for premiums, deductibles, co-pays, etc. Add it all up. To save the federal government $24.1 billion, we need to spend $29.8 billion.

In other words, this will cost us $5.7 billion. Here it is in chart form (click to enlarge): 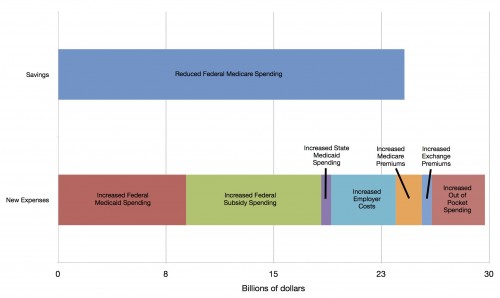 Now you can shift things around between “government” and “private” spending, but the end result is the same. After all, government spending will be paid for by all of us in taxes anyway. The bottom line is that it will cost America $5.7 billion to raise the eligibility age to 67. It will be paid for by everyone, including employers, workers, taxpayers, and even the elderly. We’ll all pay for those things in the “new expenses” line.

We might as well just leave the eligibility age the same and tax everyone for an additional $5.7 billion. It would cost us just as much, and we’d get the bonus of not actually harming seniors or increasing the number of uninsured, to boot.

Want to read more? Try this KFF report and this CBPP post.