Demography is not destiny

The conventional wisdom, often repeated in the media, is that the retiring baby boom generation will drive entitlement spending to unsustainable levels. That’s a very misleading view of what will really happen, though it has a grain of truth.

Just take a look (again) at one of CBOs recent projections (with respect to the issues raised in this post it doesn’t matter which one you look at):

Look at this figure very carefully. It reveals a lot, which is why I’ve discussed it a lot. One thing it shows is that Social Security spending grows between 2010 and 2030, and then it stops growing. Moreover, while it grows, the extent to which it does is small relative to health care spending. Federal health spending grows faster and continues to do so well after 2030. Already these facts tell us something important.

Social Security spending is mostly a function of the size of the population entitled to benefits of that program. Health care spending is a function of that and per beneficiary health care costs. Thus, the growth of the two types of programs tells us something about the growth in the size of the beneficiary population versus the growth in health care spending. With respect to the elderly, who are entitled to both SS and Medicare, growth of the latter is much larger than the former. Health spending growth is a far bigger problem than changes in the age distribution of the population.

This fact is revealed even more clearly in a nice graph produced by Peter Orszag. 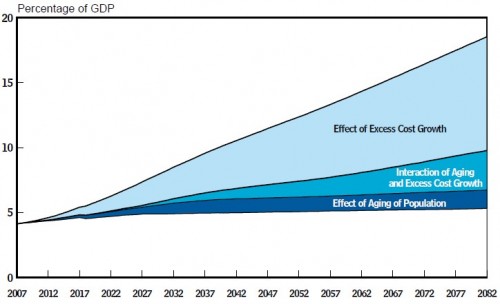 The bottom area shows how much Medicare spending would grow if health care costs stayed fixed. That is, it is only a function of population aging. This is the “demography is destiny” part. The top area is growth associated with health care cost inflation, fixing the population as it was in 2007. This is growth purely due to health care costs. The middle area is the cost growth associated with increasing health costs applied to newly entitled individuals, those added to Medicare rolls after 2007. One could argue whether this is attributable to population growth or health care cost growth. It’s both. But the fact is, if health costs per person didn’t grow this band would cease to exist.

There’s another problem with the “demography is destiny” meme: we can do very little about it. Thus, there’s very little value in accentuating changes in the age distribution of the population. It relates to few policy levers (perhaps only immigration policy). The promotion of the demography is destiny idea sends a signal that we are at the mercy of population change. We’re doomed! That’s a terrible message.

On the other hand, there is great value in highlighting the health care cost problem. It relates to many policy levers and it is relevant not just to Medicare but to the entire health system. We may still be doomed, but only if we choose the wrong path. We do have an opportunity to save ourselves. Moreover, if we do solve the health care cost growth problem, addressing Social Security’s solvency problem will be trivial. We’ll have far more room in the federal budget when health costs are growing at a sustainable rate.

I really wish the media would stop worrying about the baby boom generation’s retirement and start worrying far more about health care costs. We can do something about that, but not until most Americans comprehend the issue.