Days alive and out of hospital

Earlier this week I flagged this passage from Karen Joynt and Ashish Jha’s NEJM Perspective:

I asked Joynt for some literature on this combined measure. Below is a concise summary of what she sent me.

The ESCAPE Trial investigators and coordinators published study findings in a 2005 paper in JAMA. They sought to determine if pulmonary artery catheterization  (PAC) improved outcomes in patients with recurrent heart failure. Their primary outcome measure was days alive and out of the hospital (DAOH) after randomization. As the chart below shows, PAC did not affect this outcome. 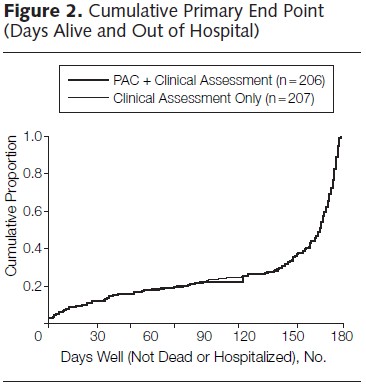 A 2011 paper in the American Heart Journal by Ariti et al. also examined DAOH, both in absolute and percentage terms. They compared heart failure patients on candesartan vs placebo.

[DAOH] has a number of advantages over time-to-event measures. First, it accounts for both the number and duration of multiple hospitalizations. The incorporation of these factors into a continuous outcome has the potential to add statistical power to detecting treatment differences. Importantly, it gives greater weight to mortality. For instance, if a patient has a short hospitalization in week 1 because of worsening symptoms but survives and is not hospitalized for the remainder of their follow-up, they will have a larger DAOH measure than a patient who has a cardiovascular (CV) death in month 2 of follow-up. A typical time-to-event outcome consisting of time to first hospitalization for HF or CV death would suggest that the first patient did worse than the second. In addition, DAOH is an objective measure and so does not have the issue of adjudication that is required for cause-specific outcomes.

The window of time over which DAOH was measured was from time of randomization until date of final examination, death, or end of the study period. Here’s their sample DAOH distribution: 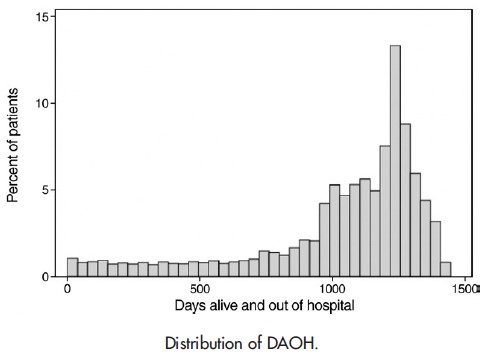 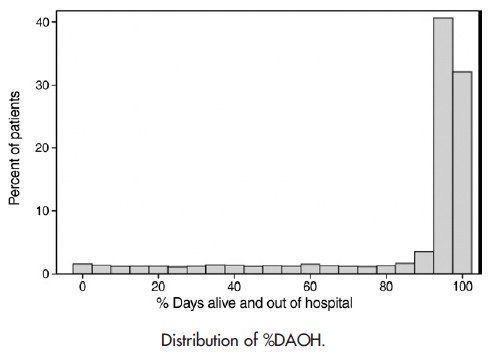 In conclusion, the use of DAOH, and especially % DAOH, provides a valuable tool for summarizing the overall impact of a treatment on mortality and morbidity. Its ability to capture all hospitalizations and to give greater weight to mortality means that it gives an informative quantified perspective on the absolute benefit of any new treatment.

There are several limitations in the use of DAOH that should be considered. First, DAOH is much influenced by deaths that occur early in follow-up so that in studies with a high mortality rate, some may feel that the impact of hospitalizations gets underrepresented.

There are some obvious ways in which DAOH as calculated in the forgoing studies would not work as a hospital quality measure. First, there’s no randomization in the real world. When does the DAOH clock start? I see two options: at time of index admission or at time of index discharge. The former would capture length of stay (LOS), penalizing longer LOS to the extent they were not offset by lower mortality or reduced chance of rehospitalization.

The other question is, when does the clock stop? DAOH for how long? A 30-day window would be consistent with current 30-day mortality and readmission measures. Longer follow-up times could be considered, though they would put the hospital at greater risk for care and conditions beyond its walls.

A 2010 paper in the European Journal of Heart Failure by Wasywich et al.* examined historical changes in 30-day, 12-month, and 24-month DAOH for heart failure patients in New Zealand from time of the index discharge. It’s useful for its description in detail of how the measure is computed. Consider their examples:

They speculated that changes in the 30-day measure was driven primarily by changes in early mortality after discharge.

Should CMS consider DAOH as a measure of hospital quality? Why or why not? If so, is should the DAOH clock start at index admission or discharge? And when should it stop?

PS: Joynt also suggested this 2009 paper by Allen et al., but I didn’t find that it added anything important for this post. I mention it for completeness.