Comparing the USA, UK and 17 Western countries’ efficiency and effectiveness in reducing mortality

Whenever we gear up to talk about changing our health care system, someone inevitably rants about how (horror!) we could have the UK’s government-run NHS. It may surprise you to learn that most people in the UK love and defend the NHS. Many of my colleagues over there take offense at our casual, and often ignorant, dismissals of their health care system.

Two researchers recently published a paper in the Journal of the Royal Society of Medicine to look at how mortality rates (ie people dying of disease) have changed in the UK, the US, and a number of other countries in the last few decades:

Objectives To test the hypothesis that the USA healthcare system was superior to the NHS and 17 other Western countries in reducing feasible mortality rates over the period 1979–2005.

Participants Mortality of people by age and gender.

Main outcome measures A cost-effective ratio to measure efficiency and effectiveness of healthcare systems in reducing mortality rates. Chi-square tested any differences between the USA, UK and other Western countries.

Results Input: The USA had the highest current and average GDPHE; the UK was 10th highest but joint 16th overall, still below the Western countries’ average. Output: Every country’s mortality rate fell substantially; but 15 countries reduced their mortality rates significantly more than the US, while UK ‘adult’ and ‘older’ mortality rates fell significantly more than 12 other countries. Cost-effectiveness: The USA GDPHE: mortality rate ratio was 1:205 for ‘adults’ and 1:515 for ‘older’ people, 16 Western countries having bigger ratios than the US; the UK had second greatest ratios at 1:593 and 1:1595, respectively. The UK ratios were >20% larger than 14 other countries.

Basically, they looked at how mortality rates have changed from 1971-1981 to 2003-2005, and then looked at how much money was spent in pursuit of those changes. This allowed them to calculate the “cost-effectiveness” of money spent in the health care system to reduce the number of people dying of disease. We know that the US spends more than any other country. More surprising may be the fact that almost all of the countries reduced their mortality rates more than the US did. So the main finding shouldn’t be surprising: 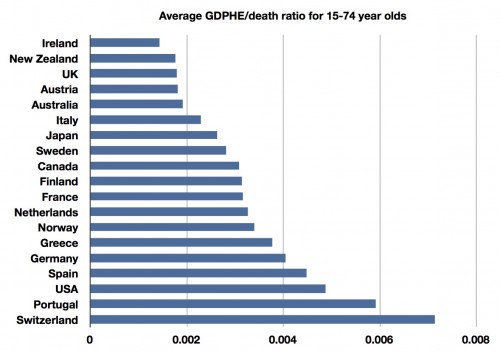 We spent more, for less, than every country except Portugal and Switzerland. Here’s the authors’ summary:

The null working hypotheses can be rejected, as the majority of other countries had significantly greater mortality rate reductions than the USA in relation to both ‘adult’ and ‘older’ people, which was generally the converse for the UK.

While in regard to the cost-effectiveness ratios, only Portugal and Switzerland had worse GDPHE:mortality rate ratios than the USA showing that most other countries achieved more with proportionately less.

Conversely, apart from Ireland the UK GDPHE:reduced mortality rate ratios were substantially better than any other country.

Nonetheless, every country had reduced it mortality, and while there are many inter-related factors that would contribute to these improvements these results are grounds for cautious satisfaction.

Now there are lots of potential reasons for this outside of the health care system, and I’m sure many of you will begin to list them in the comments. I’m also not suggesting that we should immediately implement the UK’s NHS here in America. But data like these should give us pause before demonizing other health care systems so harshly. There are some who like to think that if you live in the UK, and you get sick, that they will just let you die. That’s not the case, and the data show it. The UK has gotten pretty good results spending just a fraction what we do. In a sane world, we’d respect that kind of conservatism.