Chart of the day: The hospital productivity problem

The ACA calls for annual reductions in Medicare payments to hospitals to the tune of (an expected) 1.1% below what they would otherwise be (PDF). This (expected) number is the law’s so-called “productivity adjustment,” and is the rate at which private, non-farm multifactor productivity* is expected to increase. Essentially, Medicare is telling hospitals that they had better increase their productivity at least at the rate that the rest of private industry does (apart from farms) or else payments will fall behind. This, along with other assumptions, gives rise to a frightening chart (see Figure 1, here). 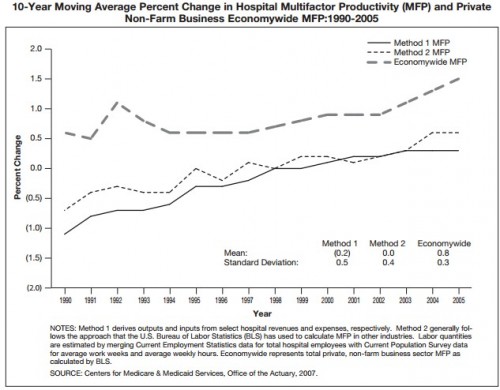 The paper (PDF) that is the source of this chart discusses the challenges of estimating hospital productivity. I suppose one could argue that both ways it does so cause computation of changes to be biased downwards, but I don’t know how that argument would go. So, in the absence of such an argument, it looks pretty likely that hospitals have never been able to increase productivity at the rate of the rest of the economy. That’s not surprising to me.

With that as a starting point, for what reason do we think hospitals will suddenly be able to increase productivity at least at the rate of the rest of the economy under the ACA? I guess the typical answer is to point to ACOs, bundled payments, pay-for-performance, etc., but I don’t buy that they will close the gap. I would buy that they might narrow the gap.

Moreover, is it even fair to single out one industry and demand that it begin to track the average productivity increase of the rest of the other industries? After all, productivity growth certainly must vary across industries. It’s not unreasonable that some would be systematically low over long periods of time, given, say, their structure or the nature of technological developments. (See Baumol’s cost disease. I blogged through his book here.)

Can hospitals really grow productivity as quickly as all other (non-farm) private industry? How? What’s the best answer to this hospital productivity problem?